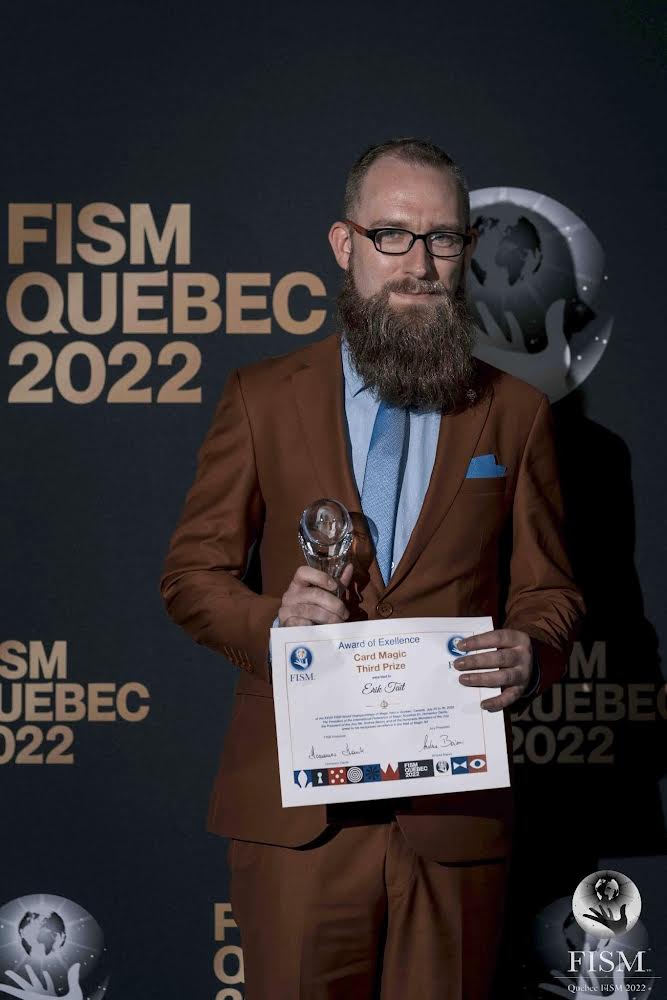 The Franklinton resident and world-class magician recently took a card magic routine he honed over years of practice to Fédération Internationale des Sociétés Magiques (FISM) Quebec 2022, the largest and most important magic competition in the entire world, where he won third place in its prestigious Card Magic category. The competition was held July 25-30.

“I’m actually only the fourth American to [medal in cards at FISM] ever, and the first in over 20 years” he said. “Countries like Spain and France have a long history of producing some of the best card magicians, and it’s really unusual for us to do well there.”

Often referred to as the “world championship of magic” and “the olympics of magic,” the event occurs only once every three years, and at a venue that rotates to different cities across the globe. This year’s event was the first one to be held in North America in more than 70 years.

Tait, a card magic specialist, brought a technically difficult routine he created (with help from other Columbus comedians and magicians) over a four-year period. It’s a variation on the classic three-card monte trick, where participants are asked to locate a specific card, usually the queen, among two others. Tait’s routine involves making all three cards quite literally disappear, in addition to a number of other sleight-of-hand illusions.

You can watch this clip of his appearance on the show “Penn & Teller: Fool Us” to see a version of the trick.

Tait’s routine, which was judged by a panel of expert magicians and witnessed by 3,000 other viewers, was awarded third place in the Card Magic category, behind Pere Rafart of Spain and France’s Markobi. Tait earned his spot at the event after placing top-three in a qualifying competition this fall. He was one of nine North American magicians in a field of 150 total competitors at FISM Quebec 2022.