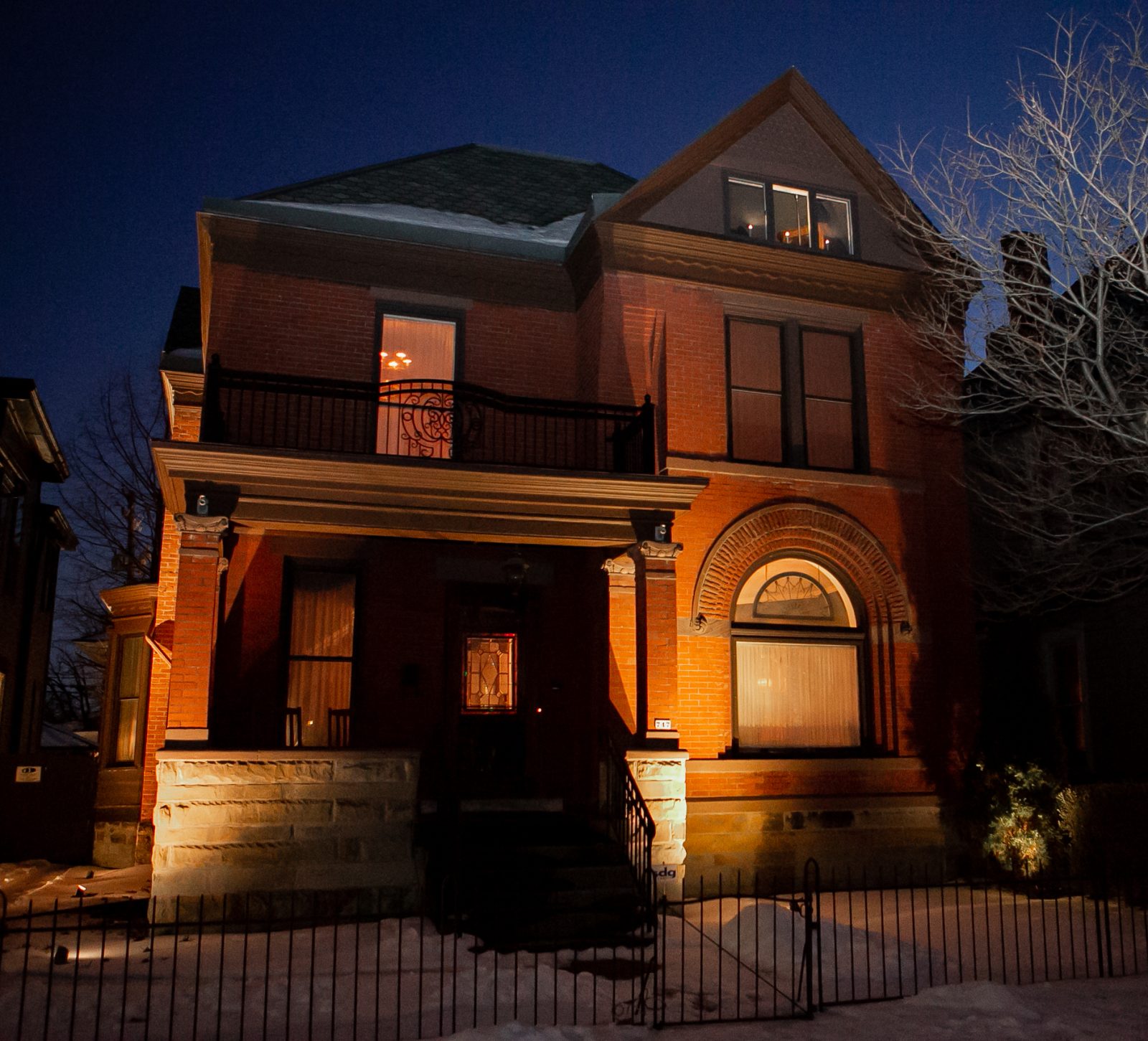 “It was love at first sight,” David Fleisher recalled of Olde Towne East.

Growing up in Washington Court House, he didn’t learn about the Columbus neighborhood—where he’s now lived for almost thirty years—until his mid-twenties. He attended a friend of a friend’s party in the area and was “immediately drawn” to the unique architecture of the homes.

So, as soon as the red-hot real estate market of the early ‘90s presented an opportunity within his budget, Fleisher snapped one up for himself. The Italianate on Oak Street was newly updated and in excellent shape. But as a lifelong project manager and history buff, his ultimate goal was to find a home that he could work to restore to its original condition.

In February 1999, Fleisher found just the place: a shabby but structurally-sound brick Queen Anne with a pillared front porch and gingerbread details located right around the corner on Franklin Avenue. He inherited it as “the worst-maintained house on the block,” but through years of labor and love, it’s been transformed into the exact opposite.

Initial renovations were driven by necessity—the old slate roof was falling apart and had to be replaced; the mortar in the 1890s limestone foundation was in dire need of repointing. But eventually, function gave way to form.

Some of the more noteworthy exterior features are the result of updates that Fleisher “strived to make timeless.” They include a custom mahogany storm door, a Fortin Ironworks-crafted railing on the second-floor balcony, and a massive, refurbished parlor window surrounded by an archway of decorative brick. While each project varied in scope, the goal was always the same: to highlight the home’s history. “With everything we’ve done, we’ve tried to restore the original structure or mimic it with a replacement as best we could,” said Fleisher. “We’re super conscientious about making sure any updates fit in with the character of the neighborhood.”

A team of family and friends has supported the work at Franklin Avenue over the years. However, Fleisher recognized his partner, Mike McKinley, as indispensable to the renovation efforts. He described their working relationship: “I’m the idea guy, the planner. [McKinley] is my engineer and builder.”

Once the weather breaks, the pair aims to restore the carriage house and deck at the back of the property. Fleisher anticipates the project will be completed in small sections, much like the main house. While slow-moving, this approach is intentional—and a source of pride. “When these homes were built in the late 1800s, they were built to last not just thirty or forty years, but centuries,” Fleisher explained. “It means a lot to me to have the opportunity to be a caretaker of that legacy. I want to make sure I’m going about my work today with the same diligence.”

Fleisher’s other hobbies are motivated by a similar desire to connect past with present. Whether he’s carrying on his parents’ love for gardening, collecting rare Columbus-native items to display in the foyer, or rehabbing classic cars out back, his historic property provides the perfect setting.

And inside, Fleisher’s home is just as historically rich as well. While it was previously known in circles across Columbus as the home with a massive pipe organ, Fleisher has swapped this for a 1926 Wurlitzer with approximately 750 pipes that spans all three floors of the Old Towne East property.

Additionally, visitors will see unique Columbus memorabilia throughout, like a phone booth from Union Station, an usher’s uniform from the Ohio Theatre, a 14-foot historial mural originally found in a Victorian Village home and more.

And as much as the aesthetic of the neighborhood and its history initially caught Fleischer’s eye, it’s the “sense of community” that has made him stick around. In so many ways, his experience on Franklin Avenue is emblematic of the Olde Towne East experience at large: rooted in respect and sustained by connection.

This story originally appeared in the March 2022 issue of (614) Magazine. See where you can pick up a free copy here!