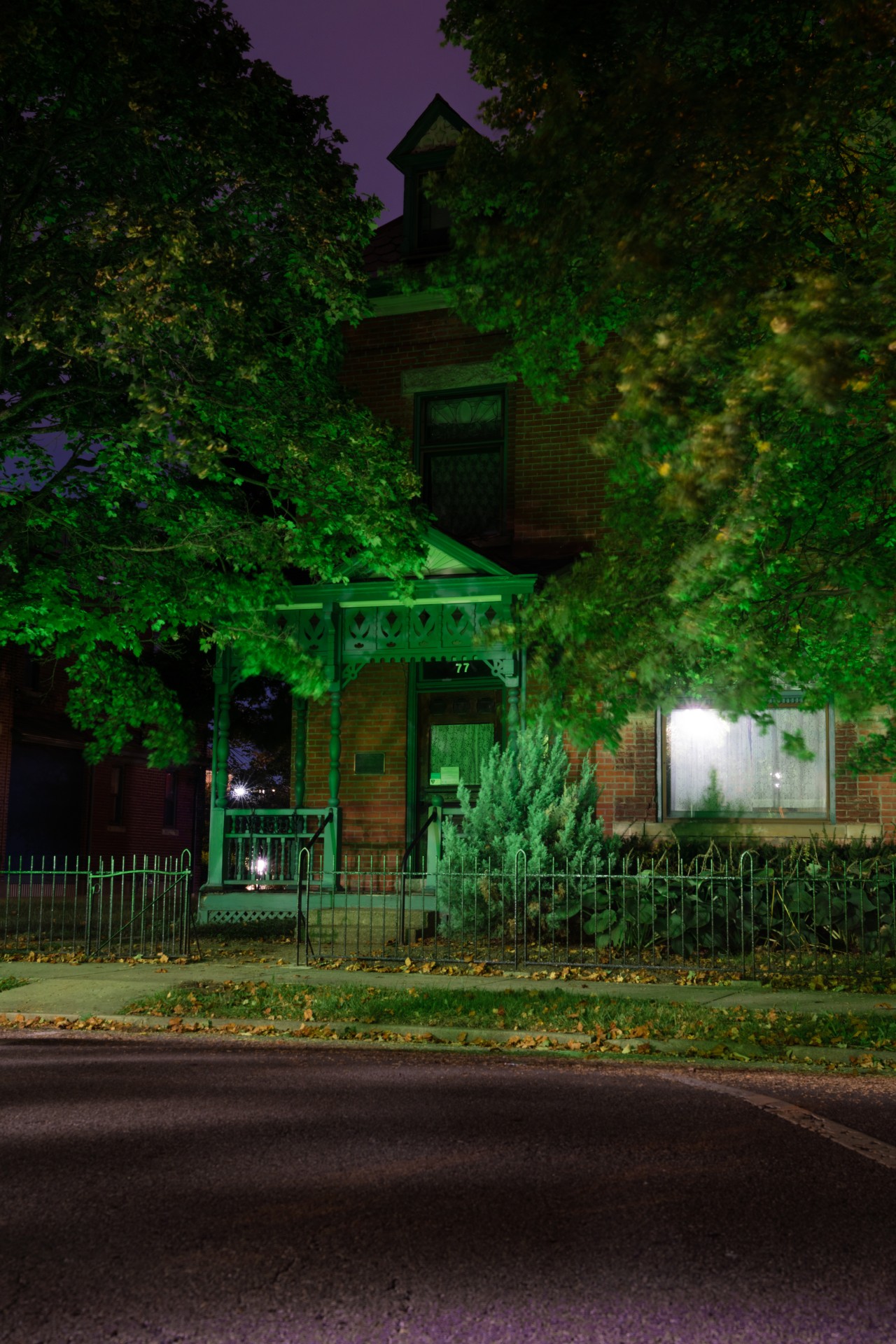 Believe it or not, Columbus, I survived a night alone inside Thurber House.

And I have a lot to share with you.

As we included an in-depth story about the haunted history of Thurber House and the nearby Thurber Center in our October issue of (614) Magazine, actually going to the house and reporting on it seemed like a natural–if terrifying–next step. And our friends at the historical home were willing to have me.

For those who don’t know, Thurber House was the former home of legendary American humor writer and cartoonist James Thurber. Today, the house–located at 77 Jefferson Ave.–is listed on the National Register of Historic Places, and operates as a unique museum dedicated to Thurber and his work.

The land Thurber House was built on served as an early mental health hospital, although this burned to the ground in 1868, killing multiple people. In the early 1900s, before Thurber and his family moved into the house, the previous homeowner accidentally shot and killed himself after handling a gun he did not believe was loaded.

These two incidents, many believe, contribute to Thurber House’s paranormal reputation. In fact, Thurber himself claimed to have an impactful supernatural experience in the home.

I arrived to Thurber House just as the sun was setting. The first thing, I think, anyone will notice about the home is the strangeness of its location. Thurber House and Thurber Center (which is next door at 91 Jefferson Ave.) sit at the northern end of Thurber Park. And while it’s located directly off Broad Street in the Discovery District, the House–and even the Park–feel totally insulated.

Yes, the sound of traffic from Broad Street and nearby Long Street filter in regularly, but you feel like you’re in a forgotten pocket of the city, which leads to a truly unique atmosphere, and also added to my fear.

After receiving a quick tour of the home and museum, and storing a few things I’d brought up to the third floor apartment where I would sleep, the first thing about the interior that struck me was its size.

Yes, the house is three floors, but it’s also longer than it is tall. It essentially occupies the entire plot of land between Jefferson Avenue and North 11th Street.

As I mentioned earlier, Thurber House is a museum. The majority of its rooms on the first two floors are preserved to appear as they would have while James Thurber was living there.

This means you run into some really, really creepy stuff (especially when you’re in a house by yourself), like an old, out of tune piano, a headless mannequin donning an antique dress and many, many old photos and drawings.

While there are photos of Thurber’s life and work throughout the House, there are even more photos of authors who have donated a signed portrait, and visiting writers (The Thurber House operates an artist in residency program). These line the hallways, the staircases and almost all of what was the house’s street-facing guest bedroom. And it was nerve-wracking: You pass hundreds of eyes on a quick pass through the house, and you’re just waiting for each one to start following you.

After exploring for a while, I spent most of the night on the third floor (in the apartment, where visiting writers also stay during their residencies).

I did hear a few strange one-off noises from the first floor, but these could have been any number of things, especially since I was unfamiliar with the normal moans and groans of the House.

Shortly after this, though, is when the only really unexplainable part of my stay took place.

The third floor consists of a long, narrow hallway that opens up into a living space and kitchen with adjoining bedrooms. I began hearing these faint creaking noises that seemed to be coming from both the hallway and the kitchen (I was on the couch in the living area, next to the kitchen). But they would alternate. I would hear it from the kitchen, and then the hallway, and then the kitchen again. And always from the same spots in each respective area.

I know many of you are probably thinking “GHOST FOOTSTEPS” right about now, but something about the cadence of the creaks–they were a little more extended and soft–didn’t sound exactly like footsteps.

I was starting to get scared at this point. I mean, come on. And then the noises began increasing in frequency, sometimes seeming to come from both the hallway and kitchen at the same time. After about 30 minutes of them occurring every 10-20 seconds, I was actually less afraid. I figured something this prolonged had to be just another quirk in an old home.

And then the noise stopped.

Ironically, this was the peak of my fear. Just as I was beginning to write off the creaking sounds, the fact that they stopped made me feel like they weren’t just some static occurrence that happens as the floorboards expand, or whatever floorboards do.

And I’m not going to lie, I was pretty afraid. Am I ready to attribute the sounds to a ghost? Definitely not. Do I have an explanation for them, though? Also, definitely not.

Thinking back on my mindset, I do think it’s possible that my expectations played a big part of this fear, though. In a new home, I don’t know if I would’ve given the sounds I heard much thought at all. But staying in a historically haunted home, totally alone and around Halloween, I was READY to be haunted.

And that’s all, really. I was able to fall asleep relatively easily a few hours later, and nothing of note happened after that, except I did end up noticing this super creepy portrait.