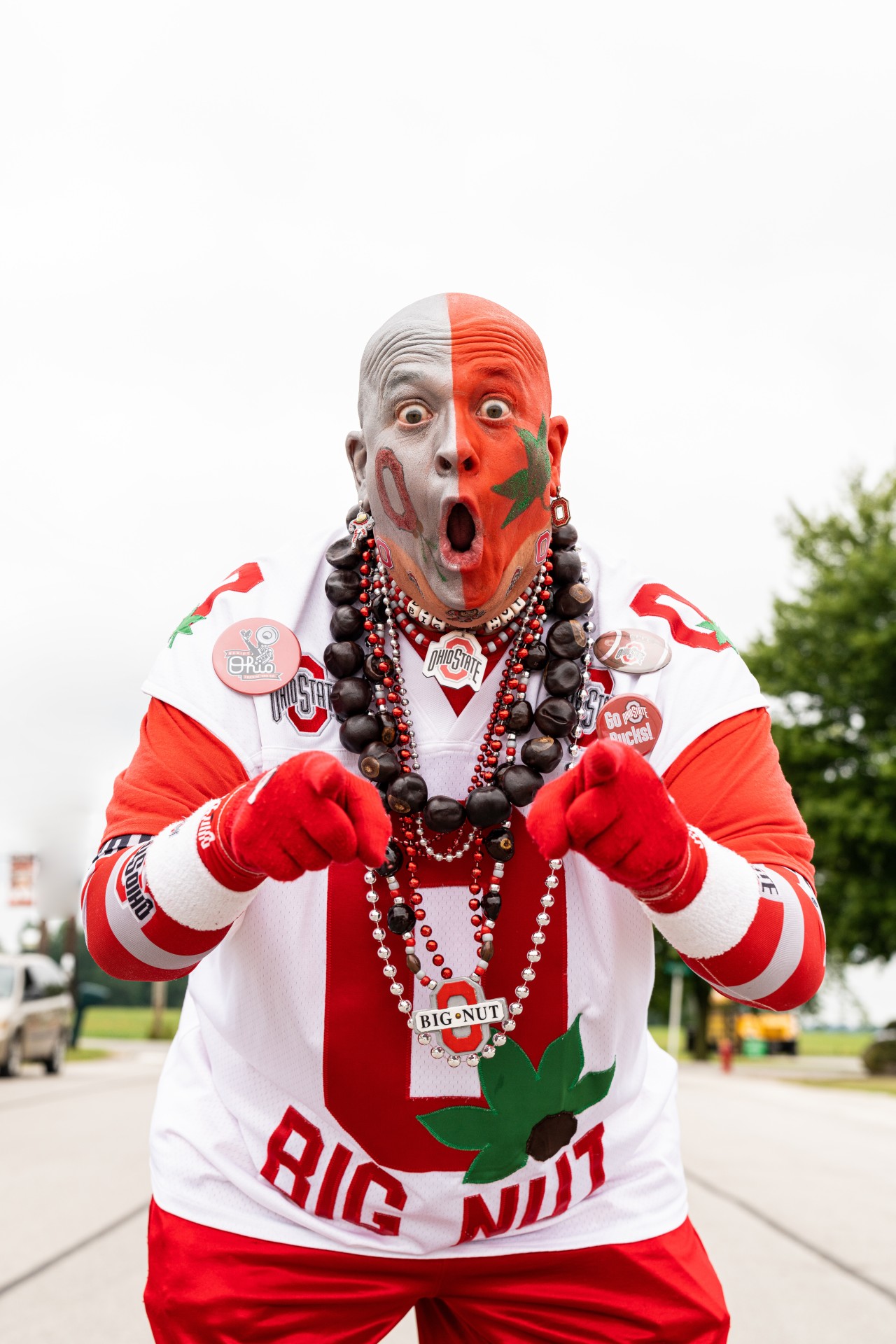 Peters, a native of the Fremont area near Toledo, lived on his grandparents’ dairy farm until age 10. He’s still in Fremont, a 40-year employee of the Whirlpool plant in nearby Clyde, and a Buckeye fan whose impact reaches far beyond the stadium.

Peters’ first trip to the Horseshoe was as a teenager in 1976, with his grandfather.

“Unfortunately, we lost 22-0. It was a rival game, That Team Up North,” he recalled. “However, I embraced the atmosphere, the electricity, just the fact of being with my grandfather—it’s a day I’ll never forget.”

About three years later, he began attending games fairly regularly, up until what he calls “the moment when it happened.”

In 1995, Peters entered a Beat Michigan tailgate’s Best Dressed contest that changed the course of history.

“Everybody knows the big guy likes to eat; it’s kind of a trademark of mine,” he noted.

He didn’t paint his face, but he wore his “crazy Buckeye clothes,” and yes, he won.

The next year, Peters knew he had to up his game against the “older ladies with their fancy embroidered stuff” to win the grand prize of a Buckeye snowman sculpture.

“I wanted it for my man cave,” he recalled.

So he added face paint, and yes, he won again, and again the following year. Now he has two snowmen in his man cave, and some of those older ladies continue to jokingly remind him that they should have won.

In 2002, Peters and his wife Terese (“First Lady Nut”) attended the National Championship game. Terese painted Jon’s face for a pep rally, and the response was overwhelming.

“Talk about being humbled, that somebody would want a picture with a fat guy in face paint,” Peters said. “I had no idea.”

Terese painted him up again the next day for the game.

The national championship DVD had a memorable shot of Peters during overtime play. And, Peters said, “that’s kinda how the Big Nut started.”

Peters eased into his new identity.

“I’m always concerned what people think. I don’t wanna offend nobody, or rub someone the wrong way. I had to be careful because, you know, [I’m a] visiting fan. I wasn’t worried about Buckeye Nation so much. I was more concerned about the opposing fans.

“But for the most part, they’ve been pretty good about it. I get a few comments from Wolverine fans, but it’s all in good fun.”

For a while, Big Nut was still sort of Peters’ secret. Little by little, though, people began to take notice, asking him “Hey, are you that guy on TV?” And Peters realized he had an opportunity.

“A true disciple of Buckeye Nation is what Woody Hayes always talked about, paying forward,” he explained.

As it happens, Peters’ family has plentiful buckeye trees on their properties, and he takes his grandchildren to collect nuts for necklaces (because “we’re all big nuts”). It started with 10 necklaces, then 20, and now he gives away 75 to 100 necklaces per game. Peters’ reward is smiles and kind words.

Eventually, Big Nut was asked to do appearances. Peters was reluctant to accept compensation, so checks went into a separate bank account and lingered until a friend suggested a scholarship fund. A year later it was official, and in 2012, the fund distributed its first two $500 scholarships.

Now, the fund awards scholarships at all seven high schools in Sandusky County, plus one in Ottawa County and one in Wyandot, for a total of up to 11 scholarships annually.

But there’s more. Peters started an endowment at The Ohio State University, which awards scholarships to underclassmen, and a fund at the Sandusky County Community Foundation. Added up, Big Nut and First Lady have raised and distributed over $200,000.

“A lot of people don’t realize I’m not a Buckeye graduate,” Peters noted. “I’m not smart enough to get a college degree. I’ll never get a diploma from The Ohio State University. But as much as that diploma would mean to me, I know that the degree would benefit one person—myself—whereas the endowment benefits many.”

“A lot of people, they call me ‘superfan,’” Peters said. “I’d rather be known as ‘superhumanitarian.’”

Big Nut and First Lady attend all regular season games, home and away. He has two rules: never turn a fan away, and always be in his seat when the marching band enters the field.

“I can go home with the ‘W,’ and it would be a hollow victory; it wouldn’t be a truly blessed day, if I didn’t see Brutus and the drum major come down that entrance ramp,” he said. “I’m getting goosebumps right now thinking about it. I call them ‘Buckeye Bumps.’”

Buckeye Nation has embraced Big Nut wholeheartedly. Still, Peters admits, “there’s a little animosity, people like ‘well, you’re always on TV.’ That’s not what this is about. I’m beyond that. Everything comes in time, and everything passes in time.”

He’s toyed with the idea of retiring Big Nut, but people’s love for the persona convinces him to stay. “What an honor and a blessing it is,” he said. “I always say I’m just a fat guy in face paint. I’m nobody. I’m Jon Peters.

“And someday, Big Nut might not be seen in the stands—but the spirit of Big Nut will always be there. ”