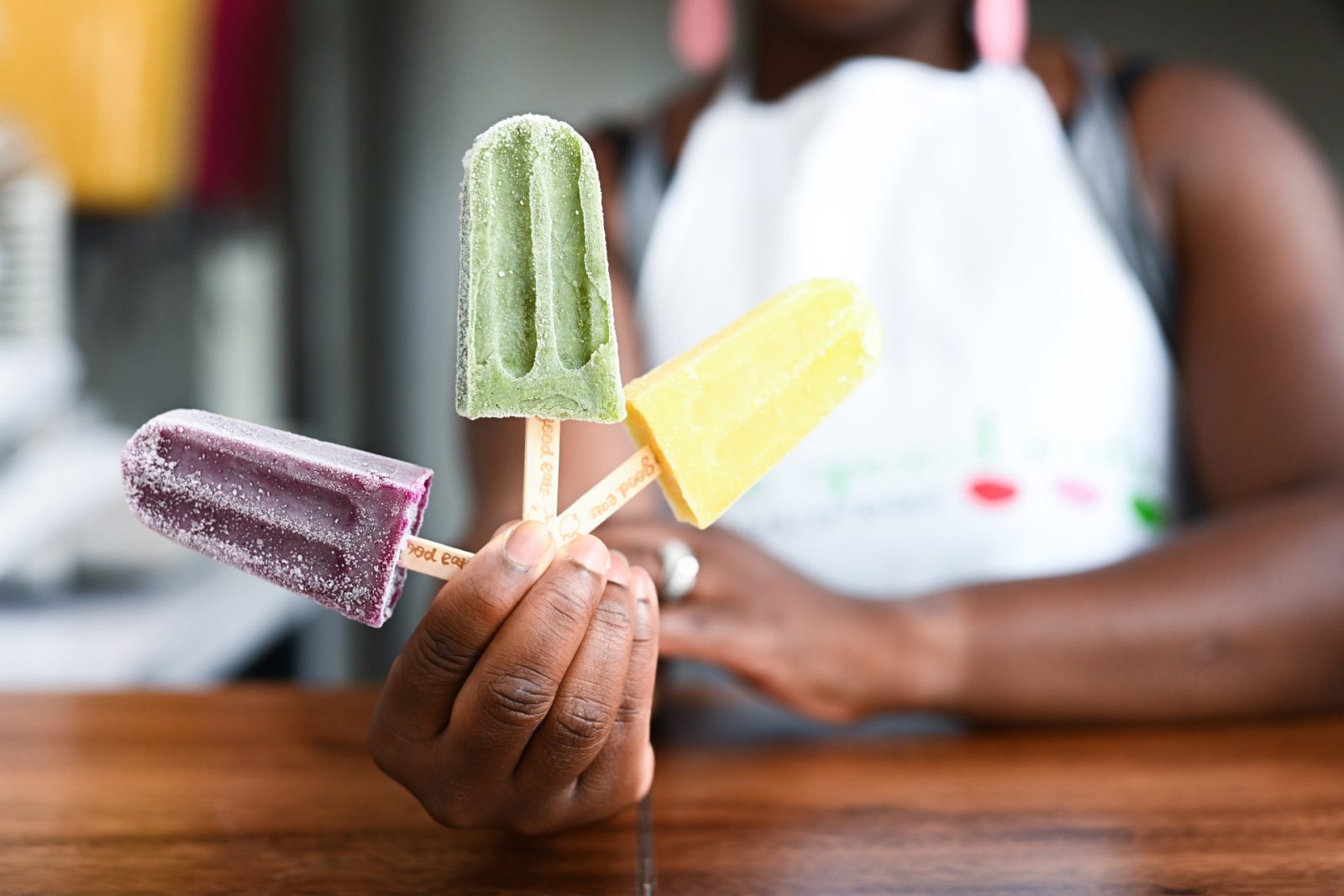 Ah, the sweet indulgence of summer. It was 1905 when 11-year-old Bay Area native Frank Epperson unintentionally created the popsicle, which has since been considered the perfect hot-weather treat. Over a century later, you don’t have to look to the West coast for syrupy goodness on a stick—during summertime in Columbus, the treats are almost everywhere you look. Local frozen delights aren’t limited to generic ice cream truck staples; instead, popsicle shops and pop-up stands specialize in handcrafted pops that feature delectable herbs and fresh produce. Don’t blow these popsicle stands.

With flavors that include citrusy Mango Lime and the smooth concoction of Cookie Milk, one bite of a gourmet pop from Rime Time Curiously Crafted Pops is just enough to remind you of the good ol’ days.

“I think pops are popular because they’re a bit nostalgic and are refreshing and a nice change up to the different ice creams we see here in Columbus. On a hot summer day, there isn’t much better than a cold ice pop,” said Rime Time Curiously Crafted Pops Founder Cody Miller.

With a knack for an endless amount of flavor combinations, Miller rotates the Rime Time menu seasonally, with boozy options such as Coconut Vanilla Bean Vodka and Four Peel Gin Ice Pop for decidedly adult fare at weddings and social events.

Whether they’re cream-based or fruit-filled, Rime Time popsicles are crafted to appeal to a variety of palates.

“We’ve really tried hard at Rime Time to create pops that are unique to not only us, but the city and the country in terms of pops,” Miller adds.

Did someone say paletas? With four locations in total since opening in 2016, Dulce Vida Ice Cream Factory has become Columbus’ artisanal Mexican ice cream favorite for sorbet, fresas con cream, and fruit indulgences such as the Mangonada. For a chocolate-dipped wonder, opt for Zumbanana for a frozen banana topped with your choice of coconut, sprinkles, or peanuts. Want the best of both worlds? Grab a pop cup for a water-based or creamy popsicle dipped in a cup of ice cream.

At family-owned gourmet popsicle stand Too Good Eats, wellness comes first. With Tropical Juicy Fruit made with jackfruit and summer squash and the mango-pineapple taste of Tropical Blue Pop—which has a blue tint that comes from spirulina—Too Good Eats captures the natural, no-filler flavors of summer.

Using spices and herbs to complement fruit, Too Good Eats takes the classic summertime staple and turns it into an organic delight for all to enjoy, without compromising any taste buds.

“No matter how old you are, a popsicle will always be delicious and fun to eat. Popsicles give you that cool, juicy flavor that everyone wants on a hot summer day. Popsicles have always been popular, but foodies-turned-entrepreneurs have made it a creative experience instead of just using sugar water and bland artificial flavoring,” Russell said. “Health is wealth, and people want to feel good about what they eat—even when they’re out having fun at a festival or special event. People like to see no added sugar and nothing artificial, especially when it doesn’t sacrifice taste and bold flavor.”

For popsicle stand J-POPS, a freshly made fruit ice pop on a hot summer day is everything. Founded in 2013, the Japanese-inspired J-POPS was one of the first brands to bring handcrafted pops to Columbus. With refreshing summer essentials including Lemon Basil and Watermelon Mint, they’ve been satisfying customers ever since.

“A pop that captures what summer is all about [has] fresh ingredients and is totally refreshing. When we think of an ice pop, it is fruit based and non-dairy,” said J-POPS Owner Steven White.

“Our herbs for those pops are locally sourced from Jorgensen Farms whenever possible. We have been told many times over that those pops in particular totally taste like summer on a stick,” White said. “When local peaches from Branstool Orchards come into season, our Justy Peachy pop is the perfect fit for summer.”

Both plant-based and averaging just four ingredients in each popsicle, J-POPS will next introduce new limited edition flavors and upcoming collaborations with Silver Bridge Coffee and The Buckeye Lady. With J-POPS bringing local businesses and customers together, Columbus is in for a treat this summer.

“Putting a twist on a traditional ice pop is so intriguing,” White said. “Columbus has so many great ice cream offerings, and the handcrafted ice pop was a totally new concept. Once people [latch] onto a great new concept, it’s only a matter of time before there is a boom in popularity.”