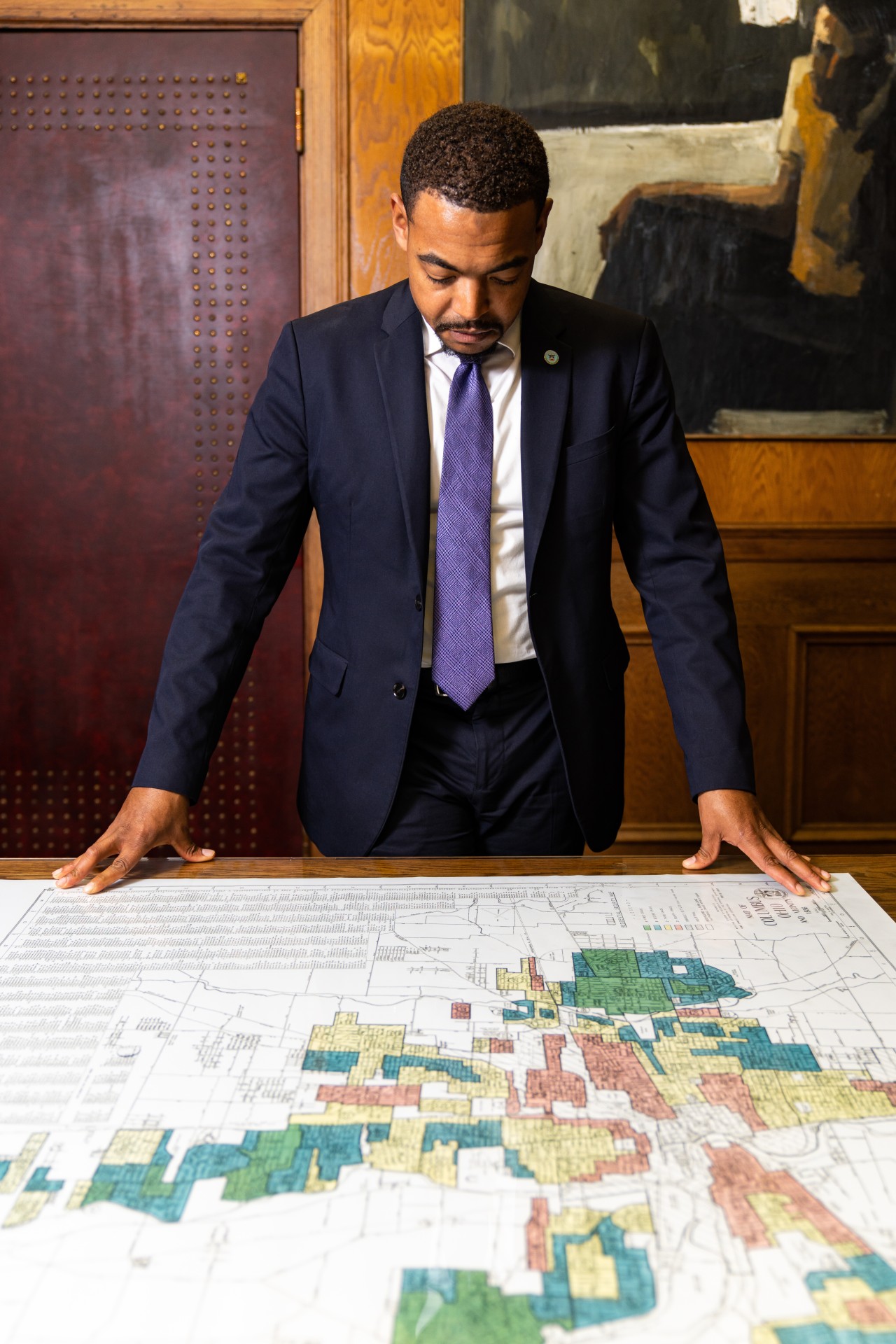 On a cold afternoon overlooking the Scioto River from his City Hall conference room, Columbus Council President Shannon Hardin recounts the story of why he entered the world of city government.

It’s a story that goes back, if you’d believe it, to before he was even born.

“For thirty years, my mom was a front desk clerk of the Columbus City Council, and that’s one of the reasons I’m here today, ” said Hardin, who was appointed to the Council  in 2014 and took over as President in 2018. “I remember when I first joined, a story ran in the newspaper with a headline like ‘Son of City Hall Executive Appointed to Council,’ and that’s always stuck with me.”

With a grin, Hardin also said his mother’s position has afforded him a unique distinction among City Council representatives.

“I’m pretty sure I’m the only Council member ever to have been breast-fed in City Hall.”

Hardin, who hails from the Columbus neighborhood of Southfield, now has a son of his own, but he’s also, in more ways than one, a son of Columbus. And as the first Black gay man to serve as City Council President, he’s leading all of us into an exhilarating and unprecedented new era.

Motivations aside, the first time Hardin actually got his  first taste of city government was when he was 15, and a student at Columbus Alternative High School. At the time, his school had an internship program, and Hardin pursued one through the City of Columbus.

A predecessor to the City’s 311 call center, he began working in what was known then as the Mayor’s Action Center, fielding calls about missed trash pickups and assorted day-to-day issues. This might sound mundane to some, but for Hardin, it served as an enticing gateway into civil service.

“There were a lot of peop[le who weren’t expecting to get their issues solved, they were just hoping to log their problems, to make the city aware of them,” Hardin said. “But a lot of the time, we got their problems solved. What was intoxicating to me, and what still is, is the ability to hear someone’s issue, and then be able to connect them to someone–usually not me–that can then solve things for them.”

Hardin later came aboard a 2008 income tax campaign with Mayor Michael Coleman, and while this taught him many of the finer points of government work, he credits his political career just as much to the late Mary Funk, a longtime Community Liaison who was recently inducted into the Columbus Hall of Fame.

“A lot of people know Mayor Coleman was a mentor of mine, but Mary Funk was like a second mother to me,” he said. “She was this little older white woman from southeastern Ohio who never wanted her name out there, but she taught me about serving selflessly. Sometimes, people would call with problems in the middle of the night, and since city employees would be sleeping, she would run out to the store for them, or see if she could help by herself..”

Just like Funk or the former call center employees he worked alongside, Hardin understands how important that closeness–actually working with and talking to Columbus citizens–is for him. Not only does he make time to talk with people at business ribbon-cuttings and restaurant openings, he opens himself to friendly encounters nearly anywhere he goes.

“People will come up to me all the time at the gas station or the grocery store to tell me how I’m doing. Who needs a poll when you have the Kroger caucasus,” he said with a laugh.

And while Hardon values this closeness, he recognizes that Columbus has its own big-picture issues that need to be faced as well.

He notes that the city is the largest in the country without an advanced transit system, and the importance of preparing Columbus residents to compete for the wave of new jobs on the way (he was instrumental in introducing the program that affords free Columbus State tuition to Columbus City School students). Hardin will also pound the table for Columbus needing more, and more affordable, housing options.

Ultimately, the Columbus City Council President acknowledged that most of these issues point toward a single larger one: growth, and how  we handle it. Because Columbus is poised for a season of enormous growth, and the son of a former City Hall staffer understands that. He understands what his decisions mean for himself, for his own son, and for each of us.

“The city we live in is beautiful today. But that doesn’t have as much to do with the last 7 or 8 years I’ve been on council; it’s because leaders 25 years ago were strategic and prepared us for this,” Hardin said. “We’re going to add 500,000 to one million people to this community in the next 10 to 15 years, and that means what we do right now will impact all of them in the future. We want to be bold with those choices; We have to be.”