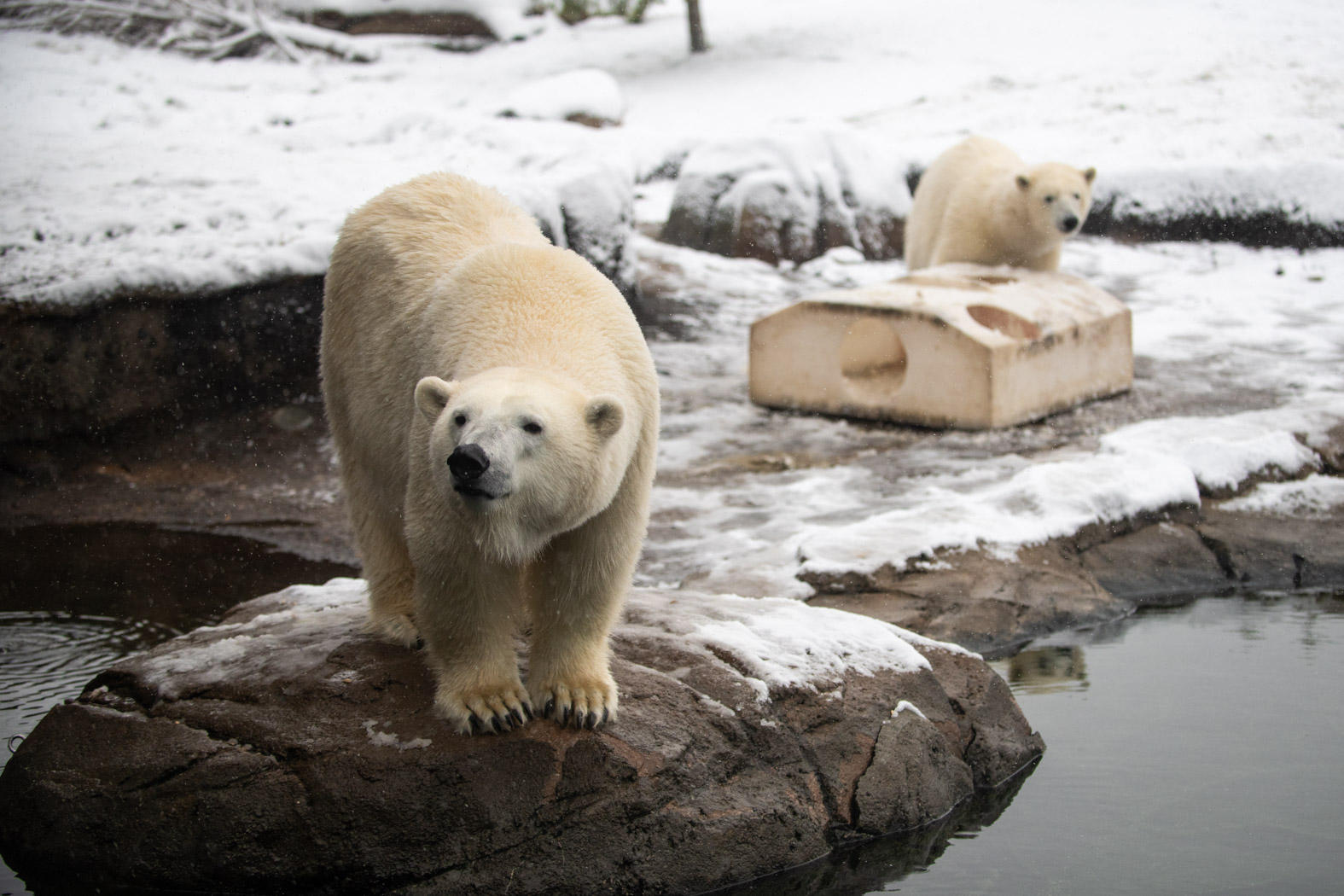 While we might wish we could hibernate the winter away, not all animals sleep through the colder months.

And while you can see some of them from your window (we’re looking at you, squirrels), you’ll find even more examples at the Columbus Zoo and Aquarium.

Whether you’re visiting for the Wildlights or just taking a stroll during the day, you’ll find winter season at the zoo is anything but a ghost town.

Many animals have access to outdoor habitats and may choose to be either outside or inside, said Jen Fields, director of communications.

“Of course, we also offer multiple opportunities for guests to view animals indoors as well,” she said.

Read on for a list of just some of the animals that should be up and at ‘em outdoors the next time you visit the zoo. We can’t guarantee that they’ll smile for your photos, though. Maybe try asking nicely–no bribes though.

This guy is the largest land predator in the world, according to the Columbus Zoo’s animal guide, and its closest living relative is the brown bear. Out of all the bears though, the polar bear wins the competition for thickest fur. It even has fur on its feet for warmth and traction on ice. And while they are known to be fierce in the wild, they are pretty cute to watch from the safety of the zoo. Try to catch them playing with their toys in their large pool.

While we often think of reindeer with dark brown coats, their fur actually lightens in the winter. To stay toasty, they’re also outfitted with a heavy coat of wooly under-fur and stiff guard hairs. You won’t spot Rudolph (he’s super busy this time of year, after all), but his friends will be sure to surprise you by their huge size.

Relative newcomers, the sea lions arrived in May in Adventure Cove, the Zoo’s newest region. Born at different facilities across the globe, they lived together for about a decade at a marine park in Shanghai, China called Changfeng Ocean World. They won’t be dancing and singing, but they will be entertaining if you catch them exploring their cool new digs.

During the colder months, bison are completely covered with long hair to protect themselves from the harsh weather. In the summer, that hair only appears on the head, shoulders and legs. Maybe they started the Movember mustache craze. Or Decembeard. They are hairy.

Snow is no deterrent to wolverines. Their large feet act like snowshoes, enabling them to walk on top of the snow instead of clomping through it ungracefully like we humans do. These are the only wolverines that we here in the 614 like.

Mexican wolves are the smallest subspecies of North American gray wolves, and they were considered extinct in the wild in the U.S. by the mid 1950s.

Only a few thousand of these impressively horned goats are left, and they’re rock-star climbers. You can see them standing on tree branches 15 to 20 feet above the ground.

At home in bamboo thickets, these guys are considered endangered. They’re also nocturnal and always seem to be hiding when we try to find them in the trees.

As many as 450 of these wildcats are estimated to be left in the wild. Since they call oak and pine forests primarily in Eastern Russia home, these hardy felines are used to extremely cold temperatures and deep snow. Their large frame helps them generate more heat, and thick fur and fat layers also help them stay warm. If you’re patient and lucky, you might hear them roar.

These guys are a bit smaller than their red-furred cousins. While they’re gray-brown in color during the summer, they turn all white during winter and have long guard hairs and a dense undercoat to avoid being cold.

For more information about the zoo, visit columbuszoo.org.