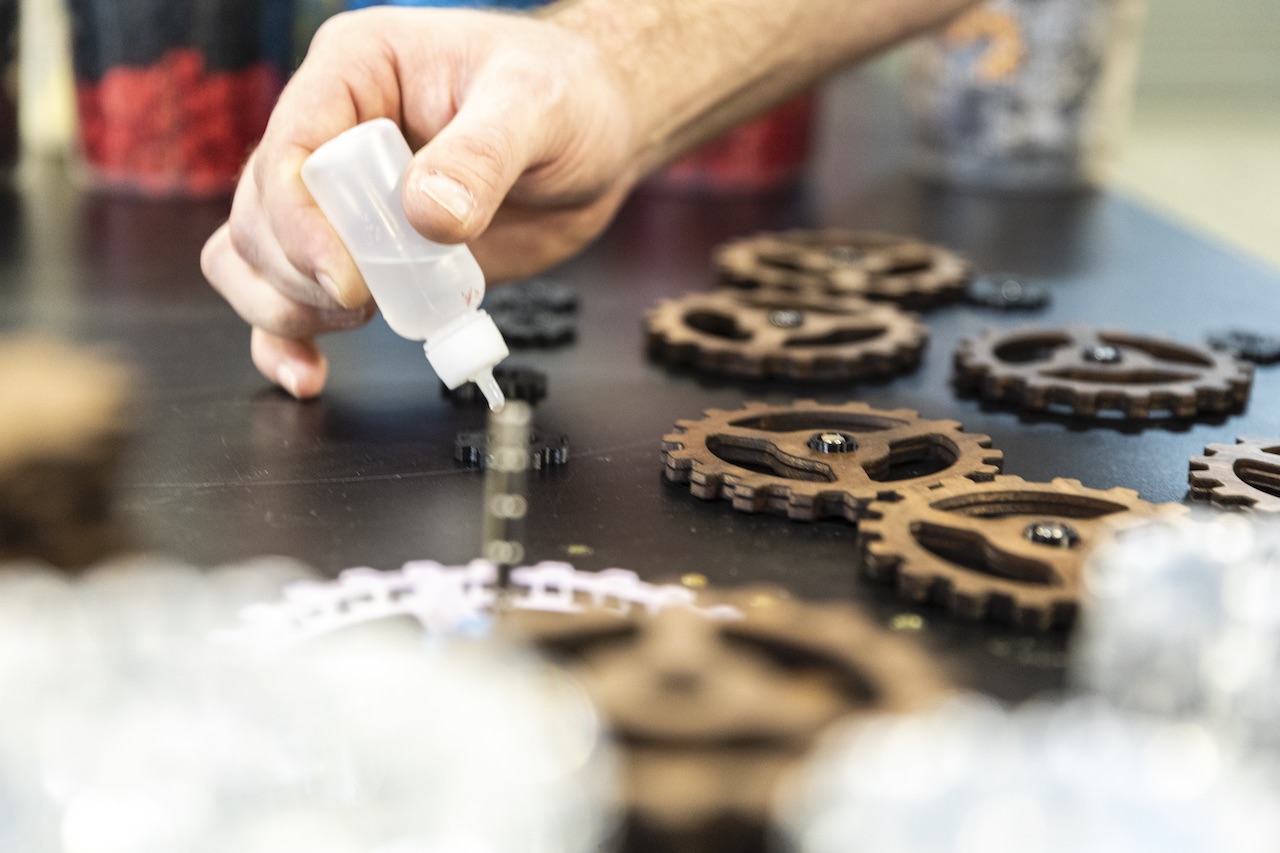 Gears. Yes, this is a story about gears. Because gears are cool—especially if they can be stuck to the refrigerator door in endless combinations of artistic expression that Sprocks inventor Matt Hatcher calls, “oddly satisfying.”

“I’ve always considered myself an inventor,” said Hatcher, who has been a member of the inventive maker space Idea Foundry on W. State St. “Even though I’ve never invented anything besides Sprocks, I’ve always been a maker, a tinkerer, a very hands-on, mechanically inclined person.”

He also has an entrepreneurial mind that’s always on the lookout for “some cool product” that he can create and turn into a business. In the case of Sprocks, Hatcher had a lifelong fascination with magnets and gears, along with a long held idea of a complicated mechanism that would do something—”I didn’t know what that something was but it was a much higher level of detail than this ‘children’s toy’ that I have now,” he laughed.

Around eight years ago, he was going through one of these brainstorming sessions and remembers becoming increasingly frustrated by how hard the inventive process was. “Why can’t I think of something?” he asked himself. “Like paper clips—it’s the simplest thing in the world, and everybody uses them.”

Just then he looked at his refrigerator, saw an expensive bobblehead souvenir magnet, and thought to himself, “That dumb thing, why can’t I think of something like a refrigerator magnet?” Suddenly, he realized: Why not combine his childhood fascinations and create gear magnets?

“I immediately stopped. I remember the moment, like ‘Oh. Yeah. Gears that are magnetic.’”

Hatcher went to the Idea Foundry the next day. Within a few hours, he had his first set of magnetic gears, laser-cut from plywood.

“I was so proud. I can’t imagine Einstein felt any better when he thought up the theory of relativity,” he laughs.

Hatcher began showing his prototype to others. “They were like, ‘Holy crap, this is so much fun! I can’t believe this hasn’t been done before!’”

For six months, Hatcher made his Sprocks by hand, a labor-intensive process with expensive materials that brought in no money. He sold them at farmer’s markets and local retailers but eventually abandoned production.

Then he discovered the magic of 3D printing.

“3D printing allowed me to not only make Sprocks cheaper, but make them better. I improved the design dramatically, plus they were easier to make.”  In early 2020, he decided to revisit Sprocks with his first Kickstarter.

“I’ve always wanted to do a Kickstarter. I like the campaigns; I love the little guys who hit it big. You hear it all the time, the single guy who makes an app, or a device, and getting millions of dollars. I thought it was time to throw my hat in the ring.”

Hatcher started the process six weeks before the launch date. “That wasn’t nearly enough,” he recalls. “The pre-launch period is usually three months, allowing you to assemble enough funders to show up on day one.”

Everyone who starts a Kickstarter campaign has high hopes that it will be an overnight success. Hatcher did better than that, reaching his goal in three and a half hours with the help of Idea Foundry members and friends. His funding now stands at nearly four times the original goal, and he has stepped away from his career as a woodworker and cabinet maker to focus solely on Sprocks.

Sprocks are available in wood and various color families of acrylic (including mirrored, glow-in-the-dark and clear), all with 3D-printed magnetic hubs. Sets can be combined and stacked into myriad mix-and-match patterns.

Parents, educators, adults, and even pediatric health care workers are purchasing them. But when asked, “Why are so many people paying for this?” Hatcher admits to struggling with the question. “Why do people like gears? For me, it’s my mechanical-minded nature.”

For others, it represents their first interactions with mechanical objects, or an educational opportunity. “Gears are the lowly building blocks of industry,” he noted. “But it’s like fidget spinners—why in God’s name would anyone ever buy one of those? There’s just something soothing about it.”

“One of the key tenets of marketing is, you have to know what your audience wants. I’ve gone down this rabbit hole for a long time, asking people ‘why do you like this?’ And, it’s like—it’s just cool. That’s literally it. They’re just cool.”