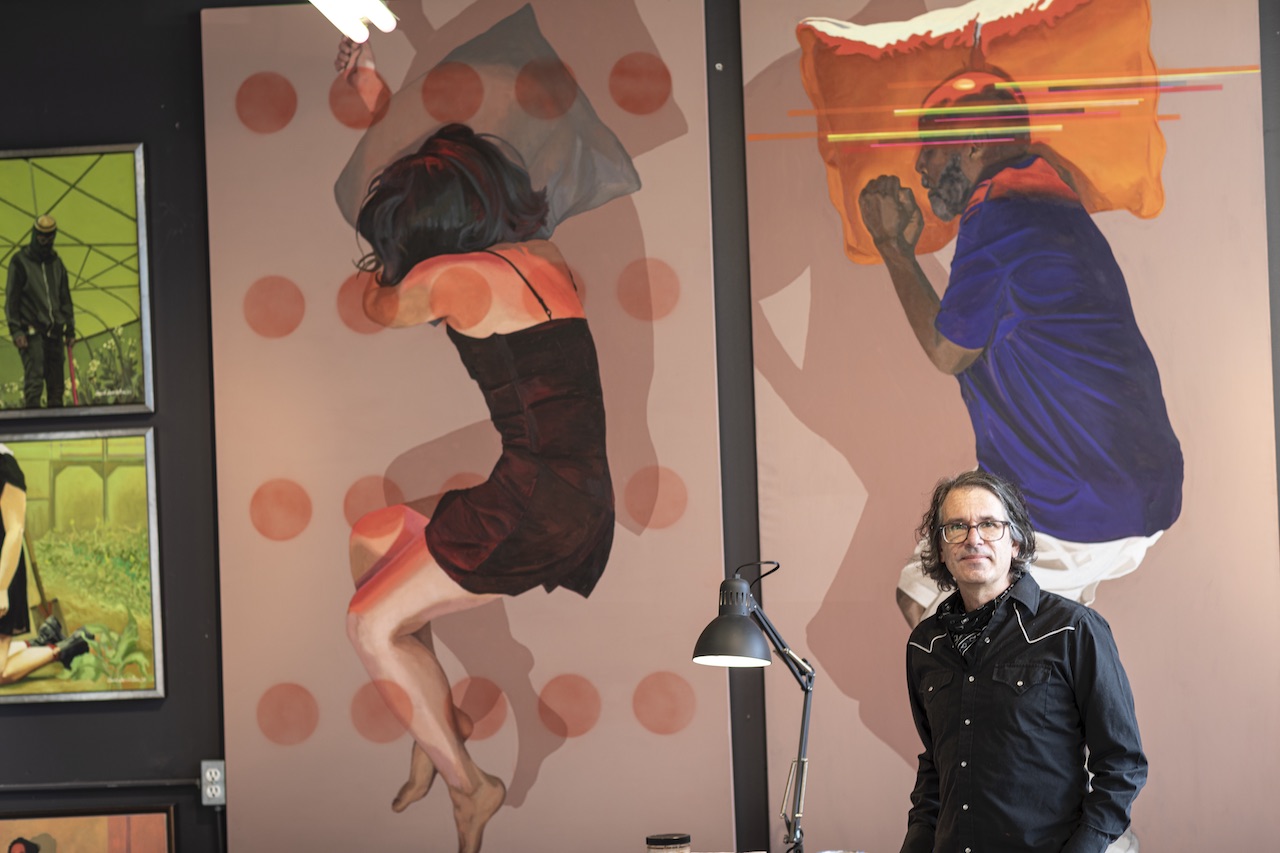 When contemporary figurative painter David Denniston began his latest series with the theme of anxiety a year and a half ago, little did he know that, thanks to a global pandemic, the theme was about to resonate with much of the world. But he was dealing with his own anxiety, and using it as a driving force behind his work.

“I think all people face some levels of anxiety,” Denniston said. “I faced little moments of it, and big moments. A year ago, I was facing it really hard and I didn’t want to get out of bed. But it was kind of like a driving force.” Denniston embraced his emotions and let his anxiety lead him to that place where he could create again.

As anxiety can cover the bearer of it like an invisible blanket, impacting every decision, so does anxiety linger in Denniston’s paintings—lifelike portraits that, at times, appear as actual photographs. The paintings are thought-provoking, but not at all literal. “I don’t know if people would look at it and think, ‘this guy is stressed out,’ but anxiety can manifest in many different ways,” he said.

With this new series, Denniston said he has been incredibly open to trying new things, something he said has been freeing. “It’s been really enjoyable, and I am really pushing color with this—a lot of warm and hot colors,” he said. “I’ve been strictly an oil painter, but now I am using a translucent spray on top.”

When you look at Denniston’s latest works (still in progress), you wouldn’t necessarily feel that it was coming from a place of angst. His massive canvases feature people sleeping from a perspective of looking down upon them. Using his mastery of light and shadow, the three-dimensional-looking figures appear to be sleeping standing up due to the orientation of the pieces. It is figurative realism at its best—from the wrinkles in the subjects’ clothing to the shadows of their sleeping bodies.

The larger-than-life 4×8-foot paintings were not made for a quick sale, however. “Nobody buys paintings like this because they are too big for their place, but I do it because it’s fun,” the painter said. “I’m just going with it.”

And although he said he makes changes to his work as he goes, he is a planner at heart. “I know what is going to be on the canvas before I paint. I use family or friends, and my boys as models. I will take a series of reference materials on my iPhone or whatever and will use the computer to try different compositions and I know what I am getting into when I paint. I can mentally see where it’s going. But it still changes all the time when I’m working on it.”

The CCAD grad whose studio is at 400 West Rich in Franklinton says he hopes viewers catch the narratives that run through his paintings. “I want it to go beyond, ‘oooh that’s good technique,’ he said. “I’m becoming a little more abstract in a way by moving scenes and compositions and leaving more to the imagination of whoever is looking at it. I’m not telling the story so literally.”

See more of his work at daviddennistonart.com