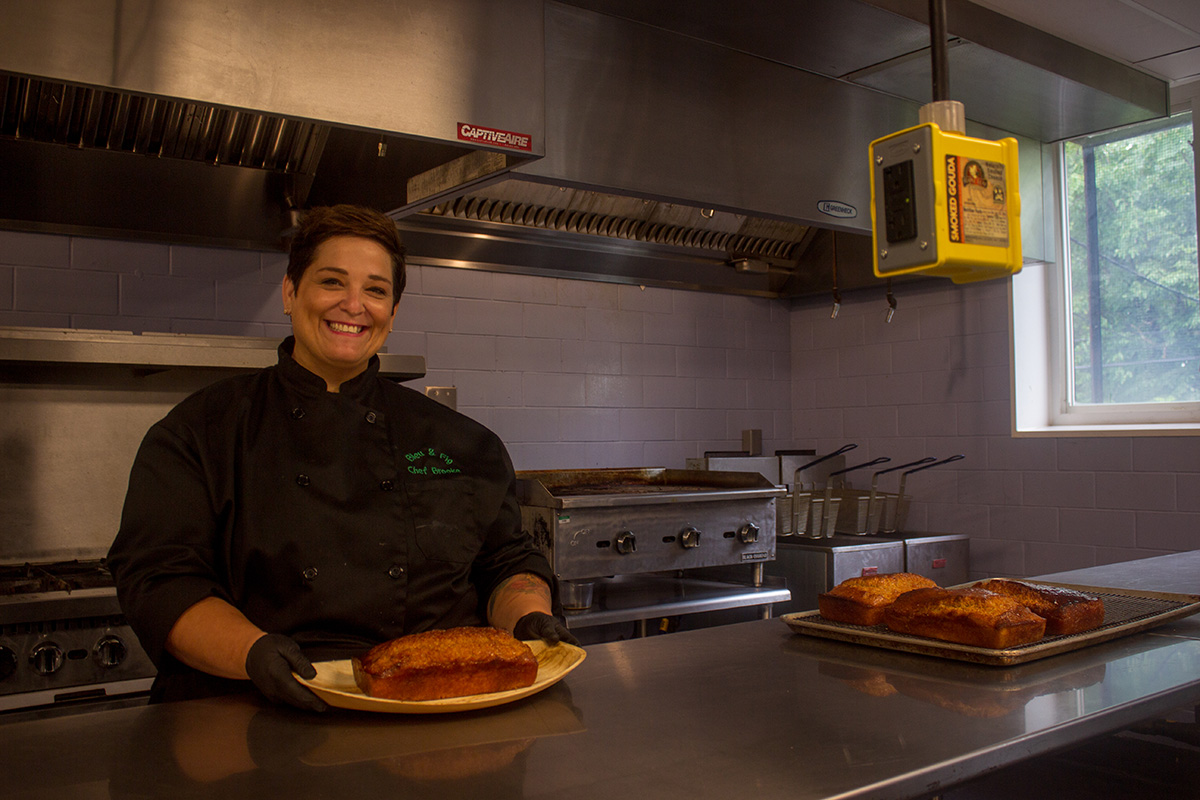 On March 10, chef Brooke Kinsey signed a lease at 1160 W. Broad St. in Franklinton, securing commercial kitchen space that would help increase the scope of her catering business, Bleu & Fig. A month prior to signing, Kinsey was named Clintonville Chamber of Commerce’s  Businessperson of the Year.

Kinsey was ready and excited to add a retail aspect to her business, partnering with the Lower Lights Christian Health Center non-profit grocery store, Jubilee Market, which had opened in May of 2018. But just six days after signing the lease, Gov. Mike DeWine ordered a statewide shutdown.

After the excitement of expanding and reaching an audience outside of an events setting was washed away by COVID, Kinsey and her team took a step back. They used the time to pivot their business from big, catering events like weddings and the Columbus  Blue Jackets, to smaller catering events for 10 or less and individual portions and packages.

“One of the questions that I’ve gotten asked the most over the years is, ‘How can I get your food?,’ and it was really tough because unless you had a party, you really couldn’t,” Kinsey said.

With a $400 minimum on catering orders, in the past it was previously cost-prohibitive of Bleu & Fig to do small orders. Having a kitchen to themselves up above the Jubilee Market has now given the catering business an opportunity to start selling smaller quantities of its signature items such as the almond bacon chicken salad, honey glazed beer bread, or brown sugar candied bacon.

Once the website goes live this Sunday, those who have been begging Kinsey for Bleu & Fig items in more personal quantities—as little as a pound and a $25 minimum order—can get their fix.

But what Kinsey has also found out besides people wanting Bleu & Fig’s signature items is that people are longing for even a small taste of a family get-together or watch party. That’s where Kinsey’s casual catering side of the business comes in. For example, you can purchase the Big Beauty Charcuterie Plate for $120 for your date night or party of up to 10 close friends.

And as excited as Columbus foodies will be to get a hold of Kinsey’s food outside of a catering setting, the importance of Kinsey moving in with the Jubilee Market has to do with the difference the Health Center has made in keeping Columbus fed. Since 2018, the Jubilee Market has offered Franklinton families healthy and affordable food, ready-made meals, and other grocery items sourced from local vendors and national distributors. Now Bleu & Fig is in the mix, Kinsey is ready to lend her culinary expertise to the Health Center’s food nutritionists.

“What being in business for 12 years has allowed me to finally do in some ways is to pay people to do some of the jobs I’ve always had to do and be able to focus on things that speak to me and mean a lot to me,” Kinsey said.

But more opportunities await. For those wanting prepared foods for curbside pickup, you can place your order here. You’ll be able to pick up orders in the alley east of the Jubilee Market between 11 a.m. and 6 p.m. Wednesday through Friday and Saturday between 9 a.m. and 3 p.m.