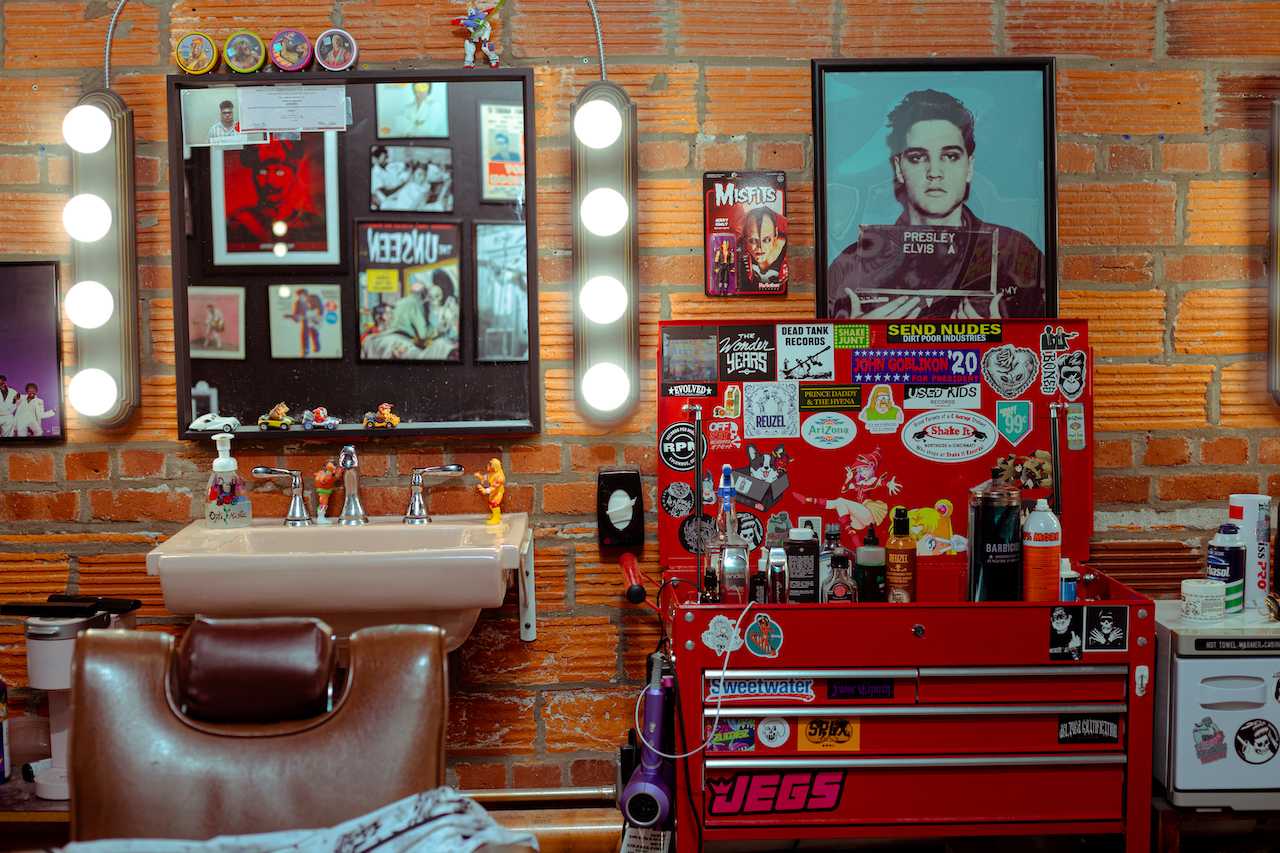 This popular Mediterranean restaurant is the newest East Market vendor

Keihin Rhoden wields the chainsaw high above his head, and it whirs like a blackhawk helicopter in the midday sun.

It’s a January Saturday in the heart of SoHud, meaning there’s some foot traffic passing by on Summit Avenue, but they’re either too confused or frightened to ask what’s going on.

And while this might sound like a zombie movie film set or one of those weird televised lumberjack competitions, it was actually the grand opening of Pyschobilly Barbershop, a new alternative barber at 2491 Summit St. that’s offering the most fun you’ll ever have at a haircut.

“We were doing our ribbon-cutting ceremony, and I couldn’t find a pair of giant scissors. I mean, where do people even get those things,” said shop owner Rhoden with a laugh. “It just fits who we are, too. We’re rock ‘n roll; we’re trying to get people to have a good time.”

The term psychobilly refers to a genre of music that blends punk rock with rockabilly, which is fitting for a music-focused barbershop (Rhoden even used to work at nearby Used Kids Records) that hopes to one day welcome live bands into the store.

But psychobilly is also a style of haircut (also known as the psychobilly quiff or wedge) featuring a prominent shock of hair in the middle of the head, either slicked back or worn stock-straight like a mohawk, with the sides of the head almost entirely shaved. And even though Rhoden and company offer just about any haircut you can imagine, their name is also a nod to the time he spent in Rotterdam studying at Schorem, a famous “Eurotrash” barber known for their psychobilly cuts.

“We’re big on them. We actually just did a March Mullet Madness, and everyone who wanted a mullet got one for free.” he said.

And the fun, infectious energy of Rhoden and his team isn’t just apparent in their whacky (and maybe a little dangerous) promo events or the speciality cuts they dole out. It’s everywhere you look inside Psychobilly Barber.

Their SoHud storefront feels a bit like a cross between a throwback punk rock venue and a hip antique store, with vintage music posters, old instruments, and even a life-sized Elvis Presley cutout adorning their brightly-painted walls. Don’t expect them to stop decorating anytime soon either.

The shop also features a row of retro barber shop chairs. One, acquired from Clifton Barbers in Cincinnati that was likely used in the early 1960’s, still has a built-in ashtray. Several others supposedly came from a Cleveland barber who would regularly cut the hair of several Cleveland Indians players. And lining the store’s rear wall is a row of wooden church pews, salvaged from a church fellowship in Hillsborough that didn’t have room for them anymore.

Looking beyond pomade and music memorabilia, Psychobilly Barbershop also has ambitions to do more than just provide great haircuts and collect money hand over fist.

“I’ve had some bad experiences with other barber shops where they just wanted to get me in and out. When someone walked into their store, they didn’t see a person, they just saw dollar signs. Who knows if they had an awful day at work, or what’s going on with their family,” Rhoden said. “I want to be different. I see Psychobilly as a place where people can just feel welcomed, where everyone can come and hang out and be themselves.”

Plus, he added, you don’t even need hair to be included.

“I even tell my friends who are bald: Just come and hang out. We want you here, we want everybody to stop by.”

If you like this, read: Entertainment venue planned for Old North site