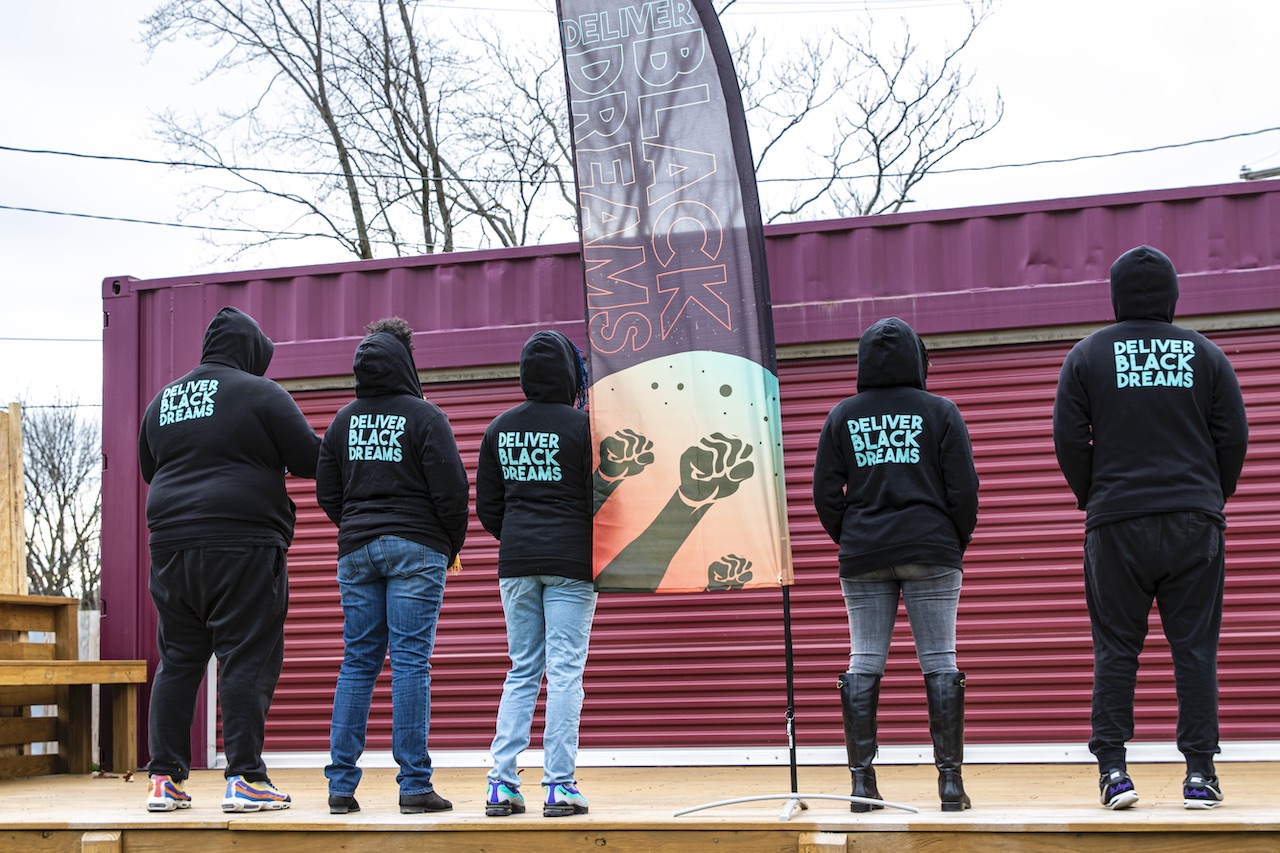 Wizard of Za gets a sweet treat thanks to new partnership

Over the course of one early November weekend, a group of roughly 40 individuals—artists and volunteers alike—convened on an otherwise non-descript retaining wall located on Fifth St. between Fields Ave. and Penny St.

By the time they were finished, the expansive mural featured the phrase “Deliver Black Dreams It’s for All of Us” in bold block letters, flanked on either side by an array of raised, multi-colored fists.

The mural is the culmination of the work of several prominent city groups—including Columbus Mayor Andrew Ginther himself—and is just the first in what the newly-created Deliver Black Dreams campaign sees as a group of many that will (in addition to other forms of public art) begin to create real change and awareness in Columbus.

The foundation for the Deliver Black Dreams project began with Ginther and Columbus City Council member Shayla Favor, said Jami Goldstein, vice president of marketing for Greater Columbus Arts Council. And while public art was always intended as a crucial component of the initiative, the true endgame for Deliver Black Dreams transcends the creation of art: It’s about enacting real change for the black community in Columbus and beyond.

“I am proud to support the work of Delivering Black Dreams, and cannot think of a time better than the present to uplift and empower our community,” Favor said. “This project is about more than just public art. It is about recommitting ourselves to achieving true racial equity so that future generations can all have the same opportunities to fulfill their biggest and wildest dreams.”

Shortly after Ginther and the Columbus City Council created the framework for the project (which was officially announced in early October), GCAC was brought in to facilitate the creation of the murals and link the project with meaningful groups.

Two such entities were The Maroon Arts Group (a Columbus-based collective that has fostered the creation of African American art since 2014) and the project’s namesake, Deliver Black Dreams, a newly-formed community group looking to make important changes in Ohio’s capital city and America at large.

“My hope is that Columbus will inspire the rest of the country,” said DBD founding member Marshall Shorts, who was working with activists in Minnesota and Michigan to galvanize African American voters for the 2020 election when he was linked with Goldstein and the GCAC, leading to the campaign’s formal creation. “The message for this is about inspiration as aspiration, imagining a future where all of us are able to thrive.”

And while Shorts—who is also on the board of The Maroon Arts Group—knew he wanted to be involved from the jump, exactly what shape the project would take wasn’t entirely clear at its beginning.

“We started off wanting to do street murals with BLM-specific messages like other cities were doing, but we felt like Columbus was a few months behind, so we thought it was befitting to build around some other ideas,” he said.

The Deliver Black Dreams Campaign will include free outdoor exhibitions of the Art Unite Cbus murals created following the June protests, cash prizes to black photographers and filmmakers telling the story of the BLM protests, and privately-funded murals such as April Sunami’s Black Women Matter (located at 859 E. Long St.). The initiative will also feature many “mural cubes,” created by arranging 8 by 8 foot paintings into cubes and placing them in high-traffic areas throughout the city, such as the Huntington Center, Lincoln Theatre, and Ohio History Connection.

According to Maroon Arts Group co-founder Sheri Neale, work won’t begin on new murals until the Spring, as surface temperatures play an important factor in how well paint adheres to concrete surfaces. If all goes according to plan, the next two pieces will be created on the city’s West and South sides, but this may still change.

In these upcoming murals, Neale and MAG plan to merge both the public art and social justice  faces of Deliver Black Dreams through a program that will empower young black artists. While each mural will have a lead artist with several supporting creatives behind them, local youth artists will be given the chance to participate in these murals, affording them confidence and important craft experience.

“We know that there are younger artists who have never made art on this scale. Our goal in pairing them will be to provide mentorship to these artists,” Neale said. “Especially with murals, because there’s so much that goes into them that people don’t realize. Finding a location and getting permission from the city or owner, having your ideas picked: It’s not as simple as sitting and painting, and all of those things are a part of helping someone.”

And for Shorts, as Deliver Black Dreams turns out more and more public art, each piece will lead them closer to their largest—and most important—goal, that of real and sustainable change.

“The short-term goals(public art)and long-term goals (changing the culture) of Deliver Black Dreams are inextricably linked,” Shorts said. “People in our community are suffering and discouraged by the injustices we see. We need form to follow functional change in our city. We deliver Black dreams by making sure that the most vulnerable amongst us are heard and can thrive in this city.”