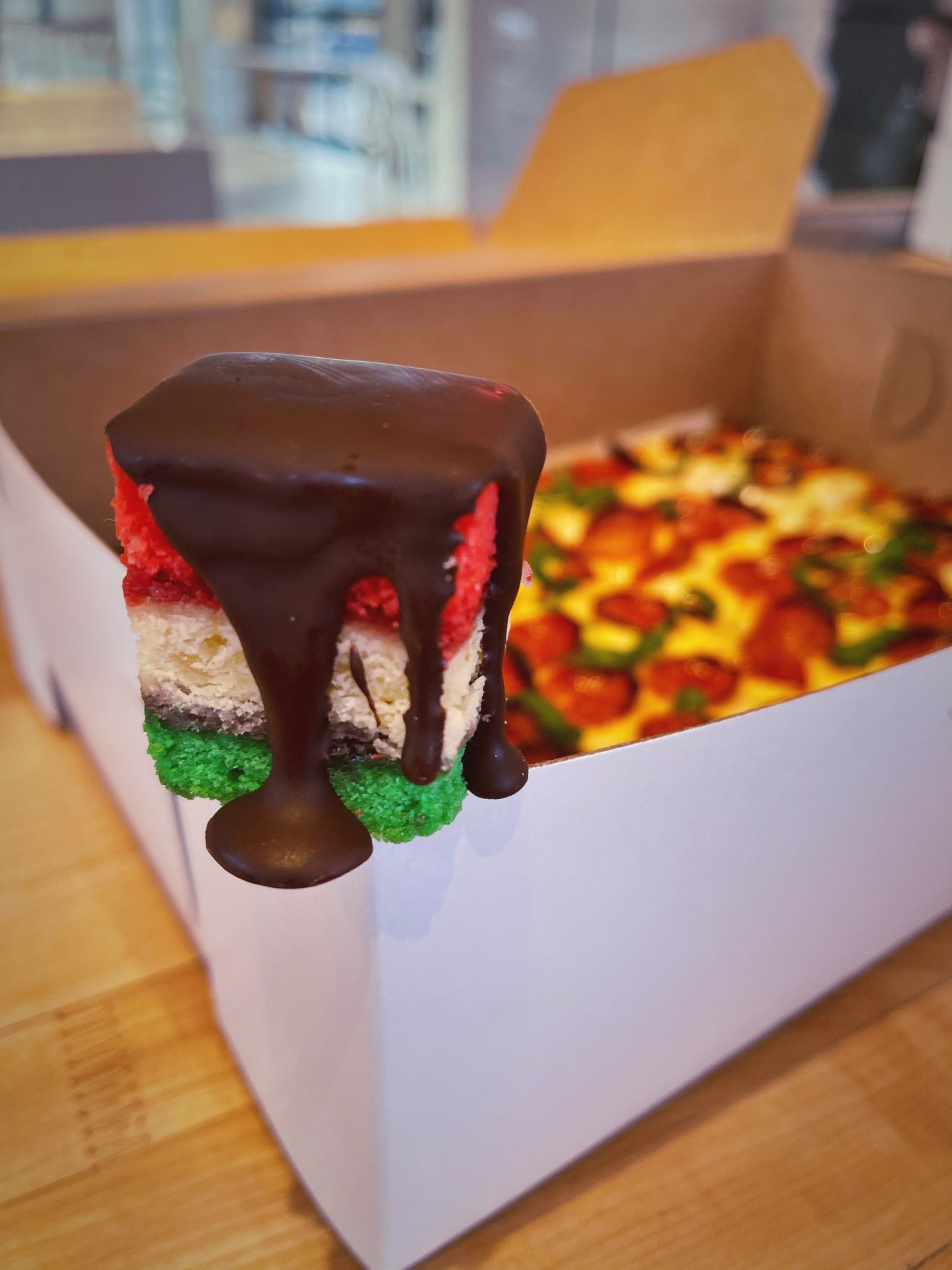 Photo courtesy of Wizard of Za

Betsy Tiano had a grand plan.

The co-owner of Angie’s Rainbow Cookies was going to give Wizard of Za owner Spencer Saylor samples of her Italian rainbow cookies and hint at a partnership until he caved.

As it turned out, they were already on the same page.

“I didn’t even need to bring him the samples, because he was already thinking the same thing,” she said.

As a result of a partnership born out of a shared Italian heritage, Wizard of Za customers will now be able to order Angie’s Rainbow Cookies as part of their pizza orders.

Saylor, who recently opened a permanent location for his Sicilian-style pizza in Clintonville, said he immediately placed an order for Angie’s cookies after learning about them last year.

“Betsy followed me on Instagram back in 2020, around the beginning of her rainbow cookie journey here in Columbus,” he said. “I was instantly mesmerized by the cookies and excited to see someone bringing them to the area—as I too was very familiar with them back in Youngstown.”

A few months later, Tiano dropped off additional cookies for Saylor to sample when she ordered some of his pizza—but the seed had already been planted with that first taste of rainbow cookie.

“From the first moment I had them, I was already thinking about ways for us to collaborate and showcase each other’s Italian culinary creations,” Saylor said.

While Saylor’s Sicilian pizza was inspired by the Italian cooking he grew up with in Youngstown, Angie’s Rainbow Cookies was born out of similar family memories in New York’s Westchester County.

“We miss our Italian family holidays,” she said.

When she got her turn to try Wizard of Za pizza on Halloween, Tiano said it was just like the thick pizza she grew up eating.

“It was just like being back in Little Italy,” she said.

When she picked up her pizza and gave Saylor samples back in October, he mentioned that he was thinking about carrying their cookies, Tiano said. They decided to wait until he was in his permanent space to start selling them. They officially started selling the cookies last week.

When Saylor was one of Angie’s Rainbow Cookies’ first customers, Tiano knew she wanted him to sell their cookies.

“It just kind of clicked in the beginning, knowing his story and our story,” he said.

For Saylor, the decision to collaborate was a no-brainer.

“I see myself in Betsy—as I believe she does the same in me. We are both young, hardworking individuals who came from Italian communities and missed those flavors here in Columbus,” he said. “Betsy puts the same love and passion into Angie’s Rainbow Cookies from the first teaspoon of sugar to putting the label on the packaging—just like we do with our pizza and cooking at The Wizard of Za.”