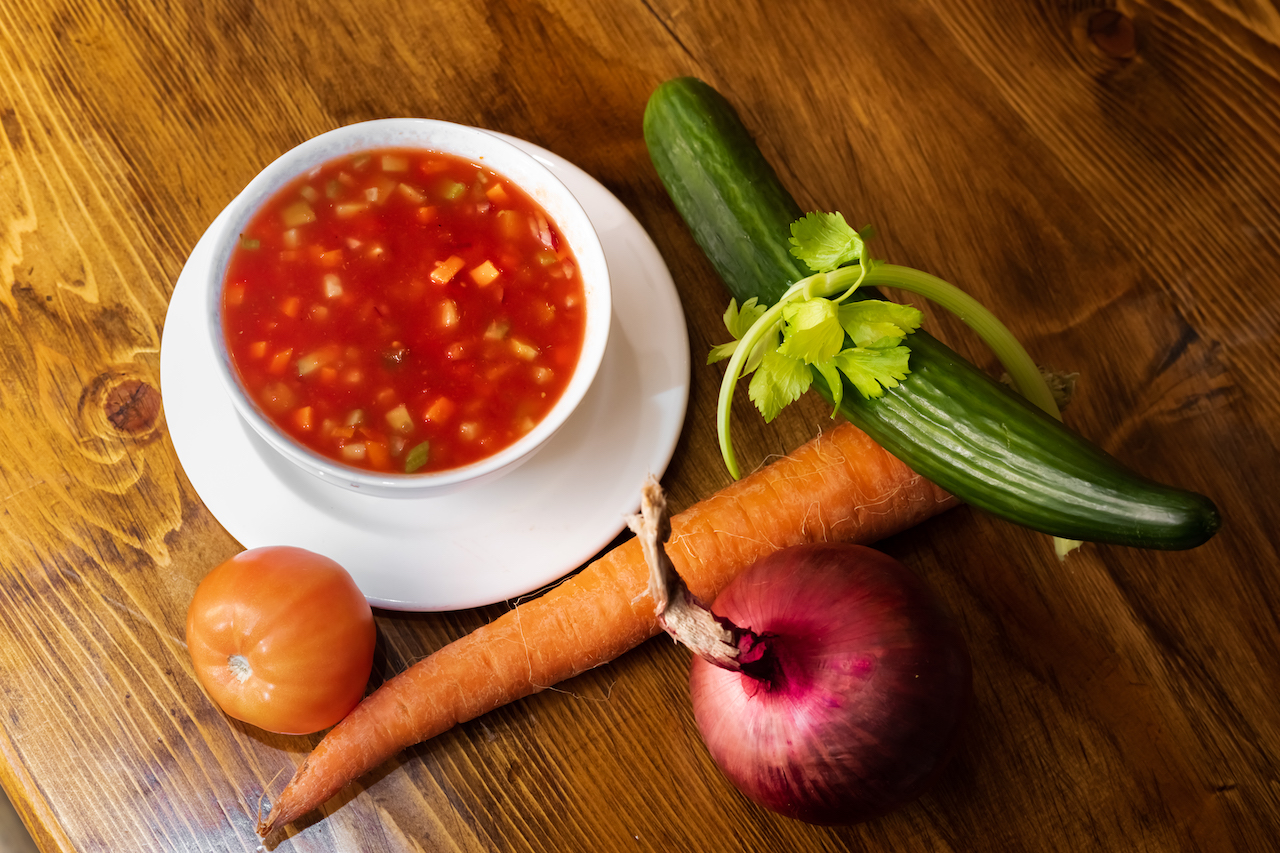 If we hear the old, “Isn’t that just cold tomato soup?” line one more time, we’re liable to lose it.

Because although it’s one of the absolute best summer snacks, gazpacho has been flying under the radar for (quite literally) centuries now.

At La Chatelaine French Bakery & Bistro, the scratch-made dish is crafted as a seasonal summer offering. And while the dish does start with a rich tomato soup base, the bulk of it, according to co-owner and general manager of La Chatelaine Val Wielezynski, actually starts somewhere else.

“Vegetables, but we don’t blanch them, don’t cook them, just peel, chop, and throw them in. They have to be raw,” Wielezynski said. “Some carrots, onion, celery, cucumber, tomato, red pepper. Really, it’s more of a garden vegetable soup, and you can add whatever you want.”

The raw vegetables add a brightness, acidity, and a slight earthiness that makes this soup the perfect compliment to a hot day.

“Gazpacho is from Italy and Spain as well, but my recipe is from the south of France, where it’s also from. It’s best on a June or July afternoon, and that’s when we make it, because it’s light, it’s refreshing,” he said. “It will fill you up just enough to hold you over until dinner. You see people in France sit with a cup or glass of it in the afternoon and just watch the ocean.”

While many people prefer it as-is, Wielezynski noted that there’s a multitude of ways to personalize your gazpacho.

A trend he’s noticed in many American lovers of the chilled soup—and one he caters to at La Chatelaine—is the inclusion of sour cream (mixed with Herbes de Provence as well) to add a richer, creamy element.

Another interesting method Wielezynski will occasionally lean on is the use of anchovy paste to add a bit of umami and some subtle Mediterranean flair.

“My wife hates anchovies, but she loves my gazpacho with anchovy paste more than when I make it without. Just don’t tell her,” he said with a laugh. (Sorry for blowing your cover, Val.)

When La Chatelaine began serving gazpacho about 30 years ago, no one in Columbus knew what it was, Wielezynski said.

“… Now we get people calling throughout the year asking for our gazpacho. You know, it’s a hard sell, but after people try it, they always love it.”

If you like this, read: Where to find the best riffs on s’mores