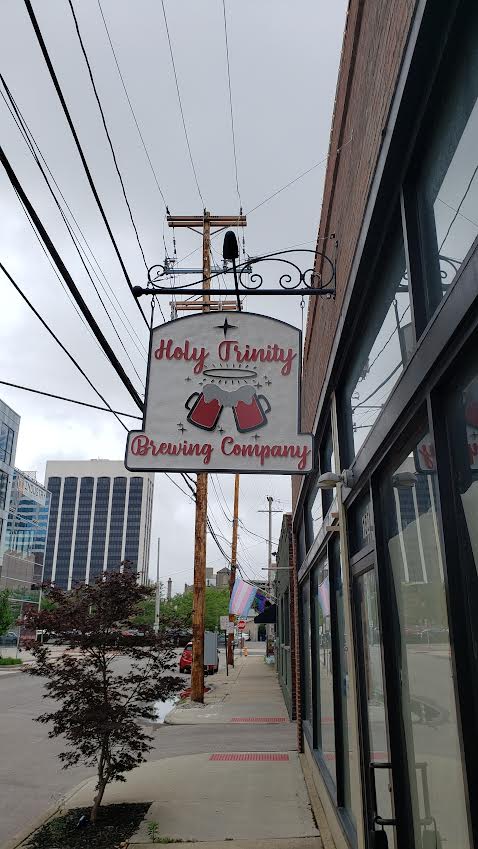 As their name suggests, faith is important to the owners of Holy Trinity Brewing Co., which will be the city’s newest craft beer brewery and taproom when it opens downtown at 155 N. 5th St., potentially late next month.

But if you talk to owner Tim McFeely—or even just glance at several of his brews’ names—you can see that humor is important to the upcoming beer-makers, too.

They offer a stout called Jesus was a Ninja, their flagship raspberry coconut porter is titled Coco-berry Jesus, and of course, there’s a cherry Porter named Cherry Poppin’ Jesus.

“It’s part of the fun, seeing all these great names,” McFeely said. “And craft beer should be fun.”

A historic downtown building will house Holy Trinity’s 4,000 square foot taproom, which will feature plenty of open space, natural light, and a whopping 18 different house-brewed beers on tap at any given time.

“I call myself a beer polygamist,” McFeely said with a laugh. “There’s no style that I don’t like, and I really want to offer something for everybody.”

From a wide range of stout and porter variants to IPAs, a signature Irish red ale, and much, much more, variation will be the name of the game at Holy Trinity.

There will also be a house hard seltzer on tap that will feature a rotating slate of different infusion flavors. The name of the seltzer: Jesus on the Rocks.

Holy Trinity won’t feature its own food, but it will welcome in a constant stream of food trucks for the hungry patrons in their dog-friendly taproom (although they must remain leashed).

According to McFeely, construction on the project, which has been ongoing since early 2020, is in the final stages. The brewery is awaiting its liquor license from the city after passing inspection, as well as several important HVAC pieces. He says Holy Trinity is still currently on track for a late October opening, although this could be pushed into November.

Either way though, McFeely is ready to serve his beer in a space that’s just as friendly as it is funny.

“We’re just ready to have the brewery open,” he said. “We want a place where everyone can come in, have a beer, and have a good time, no matter who you are. No matter if you’re a dog.”