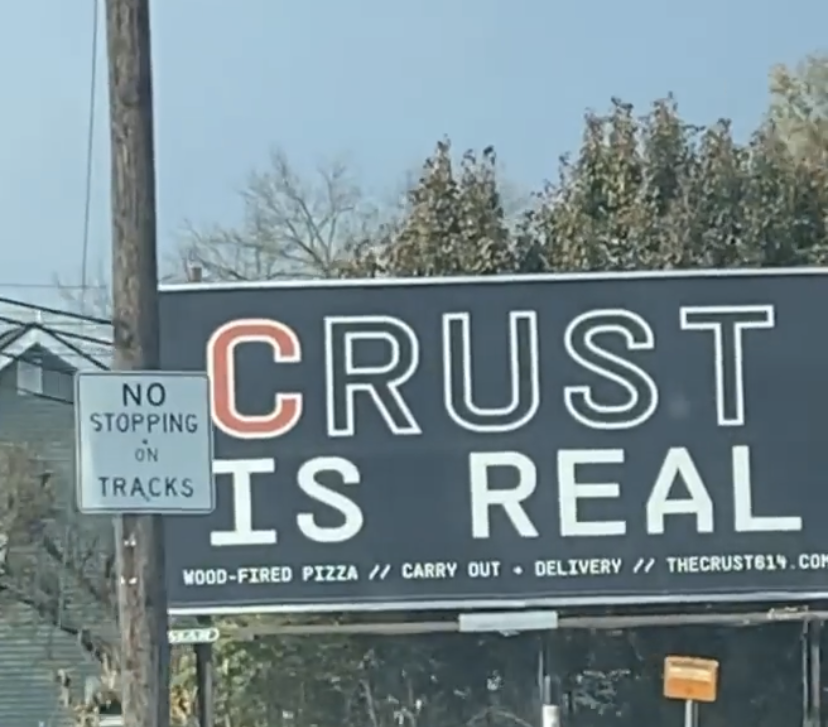 “Hell is real,” the stark billboard on a rural stretch of I-71 reads. A mere three letters, the sign has become something of a tongue-in-cheek Ohio attraction; so much so that a new pizza concept has recreated the sign—with a twist—inside Columbus proper.

“Crust is real,” the billboard, with a single, stylized red letter reads. It was put up by on Oct. 1 by The Crust, a new ghost kitchen pizza concept from the owners of The Crest Gastropub that opened this fall.

The sign is located just west of the railroad tracks on Weber Rd., between Silver Drive and Summit Street.

Owner Justin Wotring confirmed that the billboard is a nod to the well-known “Hell is real” sign. “Everyone who has driven in or out of Columbus has seen it,” Wotring said. “That’s what we were going for with it.”

The Crust, according Wotring, invites fun and whimsy into the dining experience (the concept was barely advertised before opening to create a playful air of mystery, for example), and the new sign is part of it.

Located inside The Crest Gastropub, The Crust makes pizza for both delivery and pickup. Orders can be placed online, or at the bar of The Crest. The new concept is open Wednesday through Sunday, from 3-10 p.m.