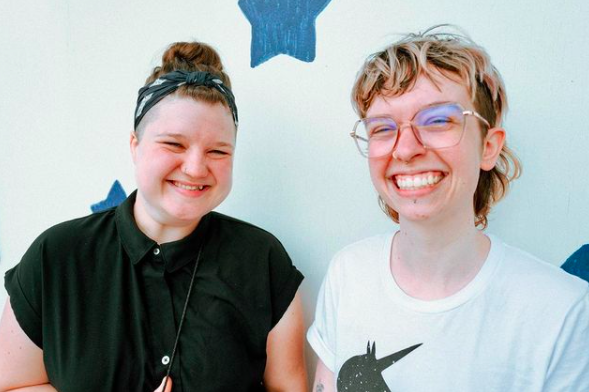 The Galaxy Coffee—an LGBTQ+-friendly coffee truck that aims to become a haven for the city’s queer community—could be opening in Columbus as soon as this fall, faster than many anticipated.

This is because, as of Sunday evening, owners Jevonna Morris and Kels Wilson officially met their fundraising goal of $18,000 on Indiegogo. The money raised will serve as collateral for a business loan the pair will use to get the mobile cafe up and running.

“It was incredible,” Morris said. “We feel really privileged and grateful that there are many people who believe in us.”

After securing a loan, the next step for the pair will be to put a down payment on one of the several food trucks they’ve scoped out as possible fits.

Initially, they had set a much higher fundraising goal—a mark that would cover many of their starting expenses—but they soon figured out that applying these funds toward a business loan would get The Galaxy Coffee up and running sooner.

“Originally we had calculated all of our start-up costs and wanted to shoot for the moon,” said Wilson. “But then we realized we could hit our goal faster if we could just get enough for our loan.”

And while Indiegogo accounted for the majority of their fundraising, the pair also received direct help from several regular customers they had while working as baristas at another Columbus coffee shop.

“One person reached out wanting to sponsor our entire espresso machine, one of our old regulars,” Morris said. “Someone else who reached out asked what we needed to get over the finish line. We’re so grateful.”

Donors also contributed nearly $450 to the coffee shop “pay it forward” jar. Available to anyone, this community fund allows those in need to use the money for a drink or something to eat.

And for The Galaxy, a coffee spot that aims to create a positive community where all are welcome, this outpouring of warmth and generosity makes the duo believe that this goal is truly achievable.

“It makes me really excited to get back into this,” Wilson said. “I’m ready to meet our new regulars now.”

If you like this, read: This new SoHud coffee spot is serving drinks from a vintage camper