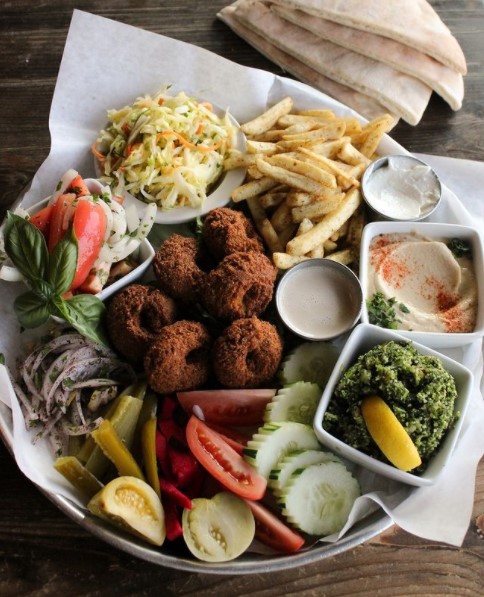 When a menu says “for two” or “for sharing” it’s basically a challenge, right?

Three courses in one sitting is a culinary endeavor no matter the menu, but here are some of the Restaurant Week spreads that would put your Thanksgiving dinner to shame. We’re fairly confident devouring these menus on your own would leave you quite full. They’re also good options if you’d like to save some of your meal for later (No judgement or shame for chowing down every last crumb, though).

Mazah | $20 per diner
You’ll be blown away when you unpack all your Mediterranean goodness from Mazah. You choose a dip (hummus, baba, etc.) with pita, one of their five salad options, like Tabouli or a three bean salad, and then the main event: The Mazah Spread. It’s your choice of falafel, shawarma, or skewers served with Za’tar Fries, house pickles, cucumbers and tomatoes, garlic sauce, and hot sauce.

Spaghetti Warehouse | $25 per diner
If you want a big, hearty Italian meal, this is it. Not three courses, but four. Choose an app, such as ribs or calamari, a salad, an entrée (hello, 15-layer lasagna), and one of two decadent desserts, one of which is Cheesecake Factory cheesecake.

Haveli Bistro | $25 per diner
Not to dis dessert, but you know when a Restaurant Week menu includes three savory courses, it’s probably a lot of food. Haveli’s menu features a choice between four deliciously fried appetizers, four hearty soups, and a variety of flavorful Masala entrees. Add on some naan or fried rice, and you’ll probably need to get out the Tupperware.

Buca di Beppo – Arena District, Worthington | $40 for two diners, $20 for one diner
Since Buca is a traditionally “family-style” restaurant, they have a menu that gives you a taste of multiple entrees, and encourage splitting the experience with another. Challenge accepted. For $40 you can get a salad, a salmon dish and a chicken dish, and a choice between spaghetti or alfredo. Then, you can polish it all off with a raspberry-topped cheesecake slice.

Condado – Multiple locations | $25 for two diners
Ah, another meal for made for two. But that price for two margaritas, a full size queso, guacamole, or salsa, and four tacos? Nah, we don’t feel like sharing.

Hoggy’s |$15
BBQ lovers, get a load of The Grazer. It comes with your choice of 3 meats, 2 sides, 3 buns, a corn muffin, and a dessert. The meat options include ribs, pulled pork, brisket, and more. For sides, you’ll have to make the hard decision between classics like mac and cheese, cheesy potatoes, baked beans, and coleslaw. The four dessert options offer a a perfect sweet treat to end your meal (or push you over the edge of fullness).

Pecan Penny’s|$20
Here’s another local BBQ spot serving up a huge menu, and we love that vegetarian and vegan friends can also gorge themselves. For $20, you get a meat sampler—3 oz of pulled pork, 3 oz of brisket and a quarter chicken—or one of their delicious meat-free options, two sides (mac & cheese, collard greens, hush puppies, and many more choices), and a dessert. That bourbon apple crisp sounds heavenly.

BBR | $25
The appetizer course is all fun and games, then you see the entrée course options, like The Arnold Classic, which is two 6oz grilled chicken breasts served with asparagus and fried rice, or a half rack of ribs served atop a bed of French fries with a side of Cajun coleslaw. To finish it off, a slice of triple layer chocolate cake.

Rodizio | $30 per diner
The first word of the menu is “unlimited,” so there’s your indication of a massive meal. try not to fill up too quickly on the Brazilian cheese bread, Polenta, and Bananas Fritas (glazed cinnamon sugar bananas) in the first course. Next you’ll get Rodizio’s award-winning gourmet salad bar delivered right to your table. Finally, the main event: “The Full Rodizio”—unlimited rotisserie meats and other delectable items. We’re not sure what the “Rodizio on Fire” menu is, but they’re also throwing that in at no additional cost.

There you have it, just a few Restaurant Week menus that will really fill you up, or make for a great date night meal if you’re into sharing. There are plenty more over-the-top menus at EAT614.com (heck, they’re all inherently pretty big), so check ’em out and let us know where you’re going to dine!

*Check with restaurants before you go to ensure you can split meals or take home leftover food.