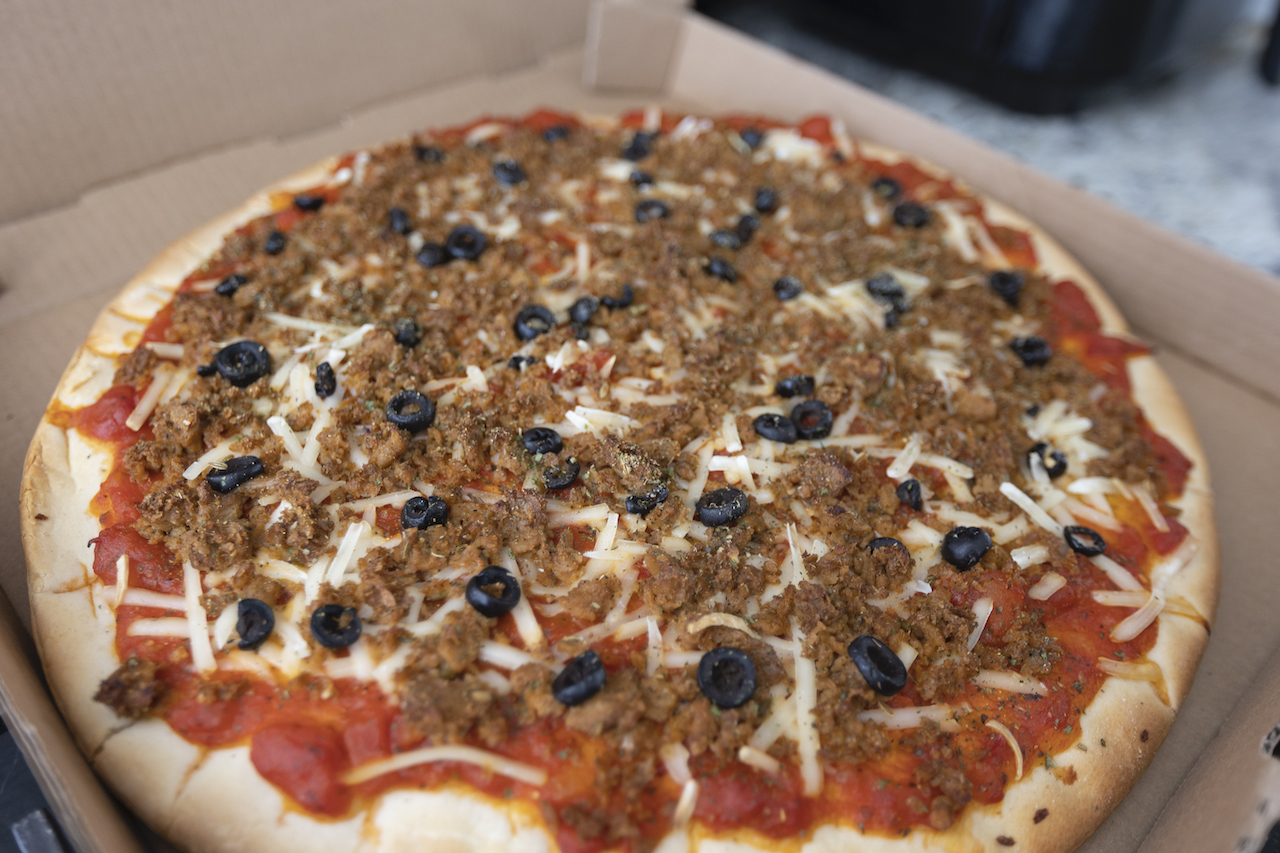 This new Columbus bakery lets you have your cake, and curse on it too

Although Brentnell Avenue is seldom brought up in conversation as a dining hotspot, the quaint neighborhood is home to a new pizza experience—Ben’s Vegan Frisbees.

His venture was inspired by watching his parents cook regularly as a child, and he and his wife’s more recent transition to veganism.

The name, however, has less to do with dietary choices. Virgil’s son thought his father’s menu staple should be named ‘frisbee,’ since Virgil’s likeness flips a pizza like a frisbee on the brand’s cartoon logo.

“We have a lot of vegan pizza here in the city of Columbus, but going vegan, you kind of want that mom and pop taste from back when you were younger,” Virgil said. “We created our own [pizza] and my wife was like, ‘I think we need to put this on the market,’ and it just took off from there.”

In two different variants, the ‘All the Way Frisbee’ is loaded with vegan cheese, banana peppers, onions, vegan Italian sausage, mushrooms, and green peppers, while the ‘Vegan Frisbee’ is minimalist with only vegan cheese and sausage. Perfectly crisp on the outside, every bite of a square-cut frisbee is succulently doughy and carefully well-seasoned. After scheduling a pre-order appointment, pickup for Ben’s Vegan Frisbee is virtually no-touch, as Virgil safely hand-delivers orders to customers’ vehicles upon arrival.

The ‘frisbee’ isn’t the only option that the menu boasts. The Beanshooter Italian Sub has also  won over patrons’ taste buds for its tangy vegan Italian dressing, deli-sliced Tofurky, tomato, onion, banana peppers, and vegan mozzarella. For Virgil, the sandwich isn’t just an alternative to traditional meaty Italian submarines, it’s also a tribute to his departed father.

“My dad passed away in 2005. Before I was born, [he used to be in] a CB club and they would have cabarets. They would travel from state to state to different CB clubs, and a lot of people around the country had different CB handles,” Virgil said. “My dad’s CB name was ‘Beanshooter,’ so in memory of him, I named the vegan Italian sub ‘Beanshooter.’”

Diagnosed with Crohn’s disease four years ago, Virgil credits his ‘cold turkey’ shift to plant-based eating to doing intensive research after his diagnosis. With Patricia’s support, Virgil was confident about his dietary changes and received the correct treatment to mitigate the nearly unbearable pain and fatigue of Crohn’s disease.

“I was once 320 pounds, but I lost a lot of weight. My wife was like, ‘Hey, something’s wrong.’ Being a man, I was like, ‘I’ll be alright,’ but as far as making a lifestyle change, getting rid of meat and dairy helped out tremendously—a 180-degree turn—I [now] have energy and motivation,” he said.

Adapting to veganism by visiting local restaurants prior to the launch of Ben’s Vegan Frisbees, Virgil also got chummy with a part-owner of a beloved Clintonville outfit, known for its pop culture twist on vegan deli options.

With various recipes under his belt—like seasonal soups, chili, and lasagnas—Virgil said he’s looking to add a food truck or storefront location to supply on-demand dishes. Eyeing an eventual spot on High Street or closer to his Brentnell neighborhood, Virgil commended some of his dedicated Ben’s Vegan Frisbees supporters for visiting from as far as 40 minutes away— and some of these dedicated customers weren’t even initially vegan.

“I still have the same people from day one who come and get a pizza maybe twice a month. What got me was the vegan community coming out to show support and placing massive orders,” he said. “The vegan community really showed up, and they still do to this day.”

With glowing reviews from customers who have given Virgil the encouragement to continue his traditional ‘frisbee’ recipe, he aims to change the eating habits and the mindsets of those who are unacquainted with veganism.