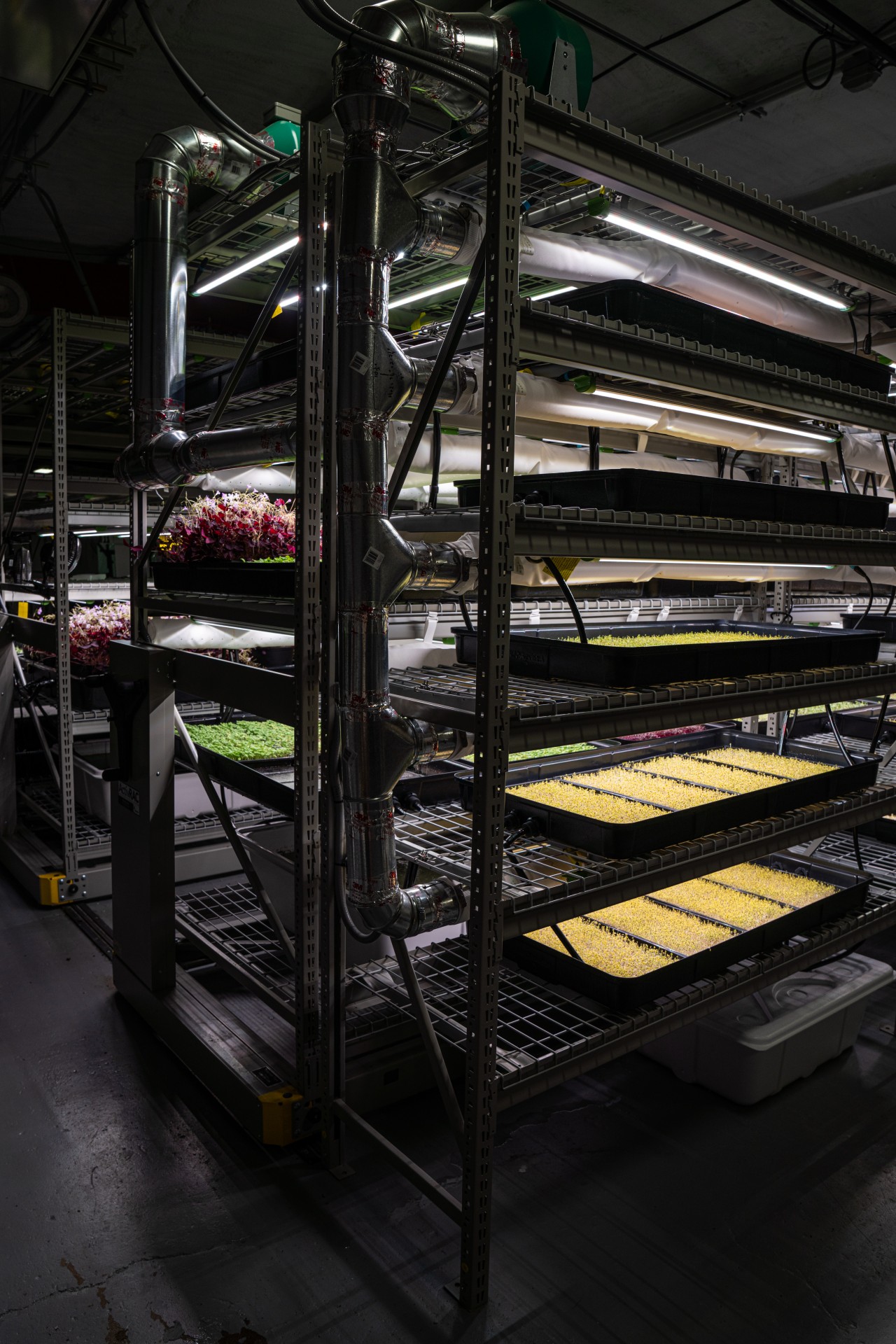 James Hu once dreamed of becoming a chef. Andrew Herczak had always planned to attend medical school. Today, the pair are co-founders and operators of Columbus Artisan

Growers, a vertical farm specializing in the cultivation of exotic microgreens.

So what caused their change in course? The story involves The Ohio State Buckeyes, a little bit of weaponry, and a whole lot of research.

“The idea started after I did a project at OSU about food scarcity,” said Hu. “We were tasked with figuring out ways to produce and deliver crops more efficiently.” A lifelong foodie, Hu felt especially connected to the work and continued studying alternative farming forms even after the class had ended. This led him to hydroponics, an agricultural technique that involves growing plants with a water-and-mineral solution instead of soil. It takes place in a controlled warehouse environment where crops are stacked vertically and don’t require pesticides.

In addition to hydroponics, Hu discovered the world of vertical farming. Where traditional growers require a massive amount of acreage to grow a certain number of crops, vertical farms “stack” plants in indoor shelving towers, building up instead of out to maximize yield per square foot. While this might sound a bit like the tenant of a sci-fi film, it allows urban growers to set up shop in spaces that would otherwise be untenable for farming.

And as a fast-growing city—both in population and food prowess—Hu thought Columbus would make a perfect destination for a vertically-stacked, hydroponic farm. But due to the “huge capital requirements” of standing up a full-scale farm, he envisioned a hyper-local operation instead; one that only served restaurants right here in the Central Ohio area. In 2018, he approached Herczak, then a fellow OSU varsity fencing team member, about the idea. “He was immediately interested,” said Hu.

In 2019, Columbus Artisan Growers was born as a vertical, hydroponic farm inside of an outwardly non-descript Milo Grogan warehouse.

Their time as teammates translated seamlessly to the new setting. Hu explained, “[Herczak] fenced the saber; I fenced the foil. Now, I handle the business side of things and he handles the growing.” This complementary dynamic has allowed the farm to flourish since its founding, even despite the challenges presented by starting a company as fresh college graduates. “It was nerve-wracking at first,” said Hu. “But I couldn’t see us doing it any other way. We’re young and we have a real drive to serve the community.”

And serve the community they have—quite literally. Columbus Artisan Growers now supplies ten popular local eateries, including The Refectory, Lumin Sky Bar, and Hoof Hearted Brewery. Hu and Herczak personally hand-pick and deliver their harvests every week. “When traditional farmers talk about fresh, they usually mean two or three days on a trailer. We talk about fresh in a matter of hours,” said Hu.

Whether it’s pea shoots for salads or floral garnishes for cocktails, chefs and diners alike are routinely delighted by Columbus Artisan products—a point of pride for the founders. “When we first started, we called around to get a sense of what restaurants’ biggest pain points with their current suppliers were,” Hu reflected. The answer was always the same: large order requirements, no delivery flexibility, and poor quality. The pair sought to remedy this through their small-batch, short-term process, which results in better-tasting produce with a longer shelf-life and more vibrant color. Plus, they strive to be extremely collaborative.

“It’s important for us to interact with our clients. We want to know what menu items they’re passionate about today and what they have in mind for the future,” said Hu. In addition to being good business, this approach fuels yet another offering: ingredient research. If a chef has an idea for a new dish but an ingredient is hard to find or doesn’t quite exist yet, the team can design, source, and grow totally unique plants just for them. The advanced service is supported by their ever-evolving suite of technologies, but also by the “super startup-friendly environment” of Columbus.

Their long-term plans include expanding to other cities around Ohio and the country. More near-term, Hu and Herczak are focused on earning “every possible” certification for their warehouse to continue differentiating it from other operations. And as for right now, they’re just appreciating the moment.

“I think a lot of people might have initially been skeptical of a hydroponic farm started by college kids,” said Hu. “I’m proud that we’re starting to prove them wrong.”