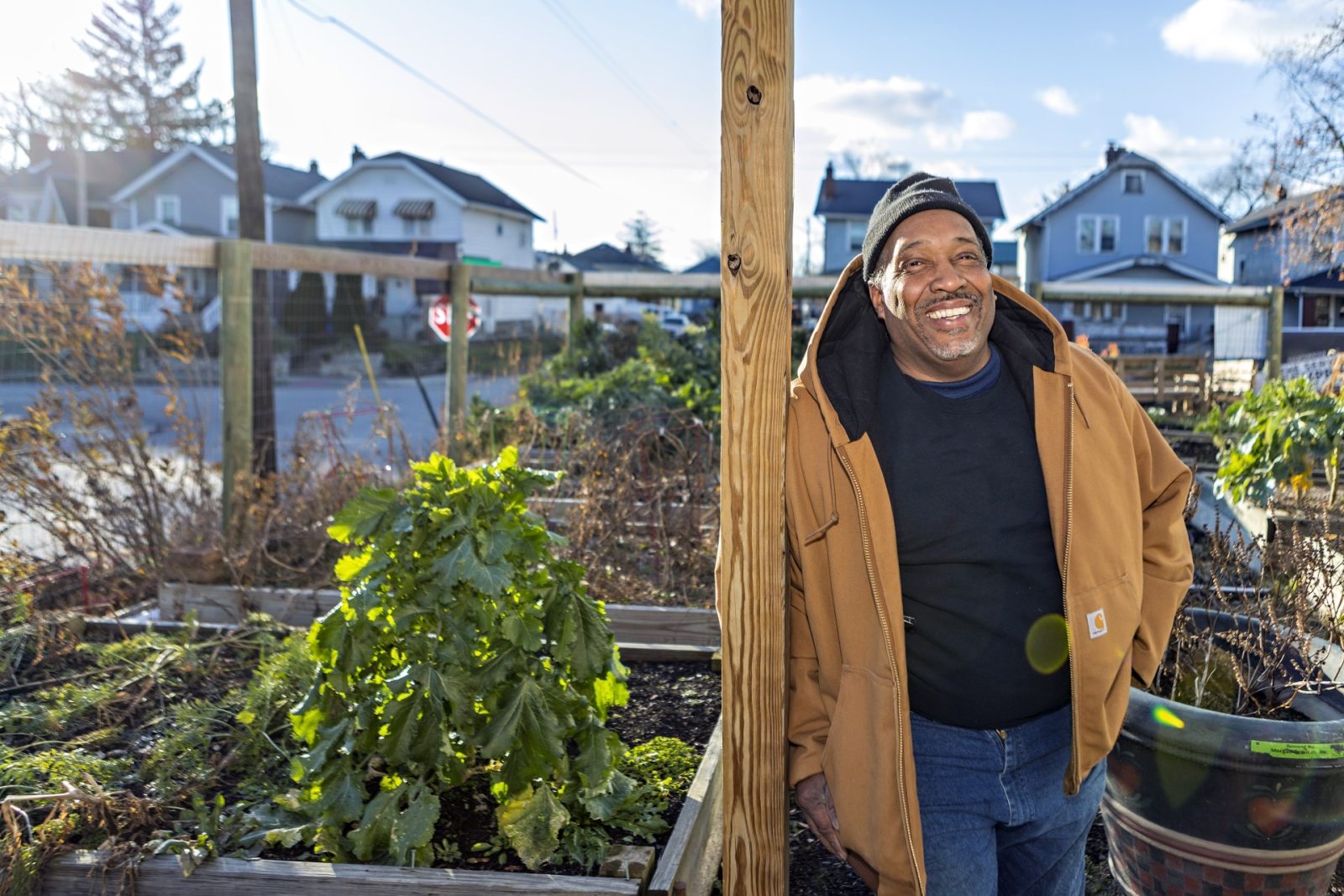 South Side Family Farms founder, Minister Aaron K. Hopkins, is a man of faith, but he’s a man of many other hats as well.

As President of South Side Community Action Network and At-Large Religious and Social Services Commissioner for the Columbus South Side Area Commission, Hopkins is focused on establishing communal relationships. A resident of the city’s South Side for 30 years, his efforts in the neighborhood have helped create South Side Family Farms, a project that not only unites his community, but provides urban-grown food boxes to Columbus as well.

A former demolition laborer, Hopkins discovered during the pandemic that his great-great grandfather was a turkey farmer. Through an Ohio Ecological Food and Farm Association course as a beginning farmer, he learned about land stewardship and no-till methods that reconnected him with his agricultural lineage.

It was when he noticed that the city was working to tear down blighted houses, transforming them into empty lots, that Hopkins decided to put his knowledge into action.

Rather than allow the lots to become overgrown, Hopkins and fellow community organizers rid them of nuisance vegetation, creating urban farms instead. And now with three locations–two on Wilson Avenue and one in Johnstown–the South Side Family Farms team wants neighboring residents to collaborate through food cultivation and create new career avenues in farming that they probably hadn’t considered before.

“The thing about having South Side pride–we’ve got a really broad vision for the work we’re doing. We have a focus on strengthening our community through agriculture,” Hopkins said. “We grow and we do allow the community to grow with us…We call South Side Family Farms ‘learning places’ [where] we do a lot of educating communities.”

In the same way that Hopkins discovered his own agricultural roots, part of the education he mentioned is geared toward reconnecting other South Side residents with their own.

“One thing that’s hindering our community is there is a stigma amongst African-Americans about [farming] being enslavement. Although we recognize the unfortunate history of Africans that were brought to this country and enslaved, they were brought here because of their ability to produce,” he said. “I was really inspired to connect youth to their heritage, for them to understand most families that migrated North that they have a base in agriculture and a heritage that’s associated with the land. This is something that isn’t taught in our urban schools.”

Looking to develop 4-H clubs to further teach students about sustainable agriculture, South Side Family Farms has recently created their own take on community supported agriculture as well. The farms have begun offering a produce package program where recipients can pay $25 weekly for a box of urban-grown produce that the organization will deliver.

And with the help of one hometown, family-owned company, there are also plans for a local farmstand where produce package program boxes will be given out.

“The Grote family of Donatos [is] donating the land behind the original Donatos Pizza that sits on Thurman Avenue, and they actually used to live right where we’re putting our farmstand,” Hopkins said. “We’re going to be distributing produce boxes and doing our packaging,” Hopkins said.

Hopkins encourages the next generation of farmers, urban or otherwise, to have organic and sustainable practices for growth in the community and with  farmland. But this, like South Side Family Farms itself, he said, requires a little faith.

“Faith is very much a principle that has guided me and gotten me to this level. You’ve gotta invest the seed if you’re anticipating any type of harvest,” he said. “You have to do some preparation to plant the seed and nurture the ground. We’re just trying to inspire others to put their hand on the plow.”

This story originally appeared in the January 2022 issue of (614) Magazine.

If you like this, read: Say hello to Dave Noble, the Columbus bee whisperer