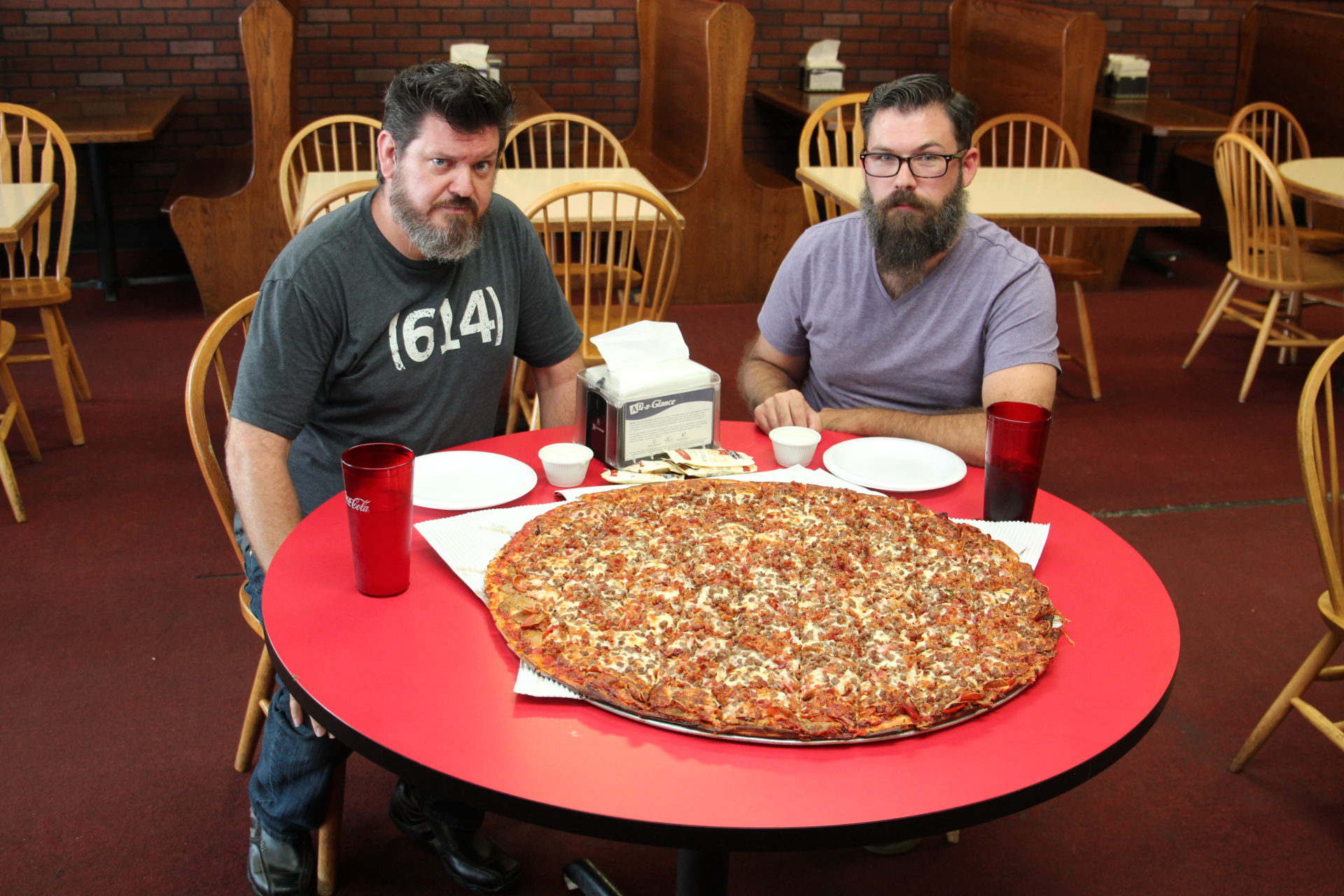 Competitive eating can be a bit of a cult. Like fans of TED or The Walking Dead, there are rules and rituals of which the uninitiated are blissfully oblivious.

That’s why it seemed disingenuous to write about food challenges without joining the inner sanctum by taking one on personally—so I did.

Joseppi’s Mega Meat Pizza Challenge was the obvious choice for several reasons. It was the only team contest, so spreading the blame as generously as the sauce would still preserve my street cred. It also had the lowest rate of success, which set the bar right at my level. Finally, the payout was pretty impressive, not that I’d be in the mood for another pie any time soon. 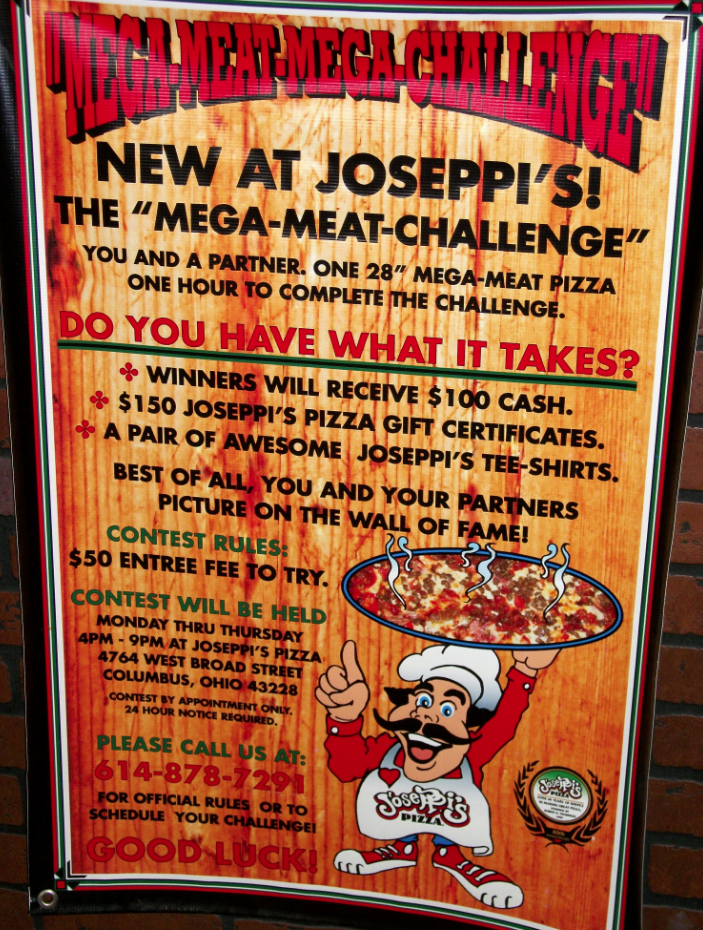 I presumed finding a partner would be equally challenging, but it turned out to be quite easy. One post on Facebook yielded a quick offer from someone who also had the gumption, just not a teammate. Blase Pinkert and I are in the same neighborhood beer brewing brood. The sometimes powerlifter and Gaelic football player could crush you with a gaze as easily as a clenched fist. It didn’t hurt that he also had a reputation for eating anything at least once and a beard big enough to hide a few slices under it if the contest was close.

“In the Air Force, I was the guy who would take on any challenge, that was my role in the shop. I’ve always been an entertainer; so I fed off of the attention,” Pinkert revealed. “I learned I could get people to throw 10 or 20 on the table and make a few bucks doing this.”

We’d called ahead the week before, so they were expecting us. The crust starts out on a pan the size of a wagon wheel, and by the time they’re done topping it with successive layers of meat and cheese, it’s nearly as thick as one. It’s so big, it has to go through the oven twice and takes two people to carry it. 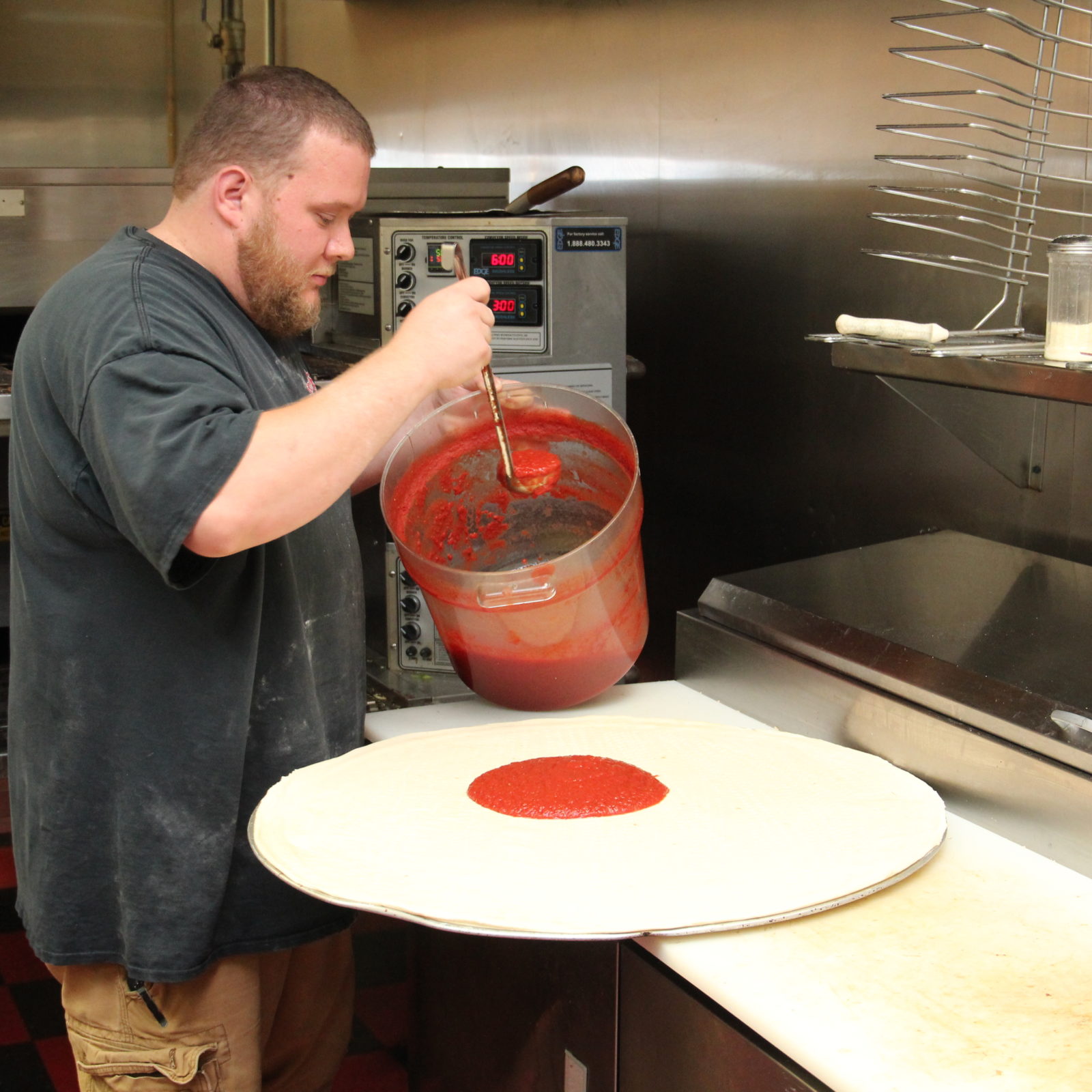 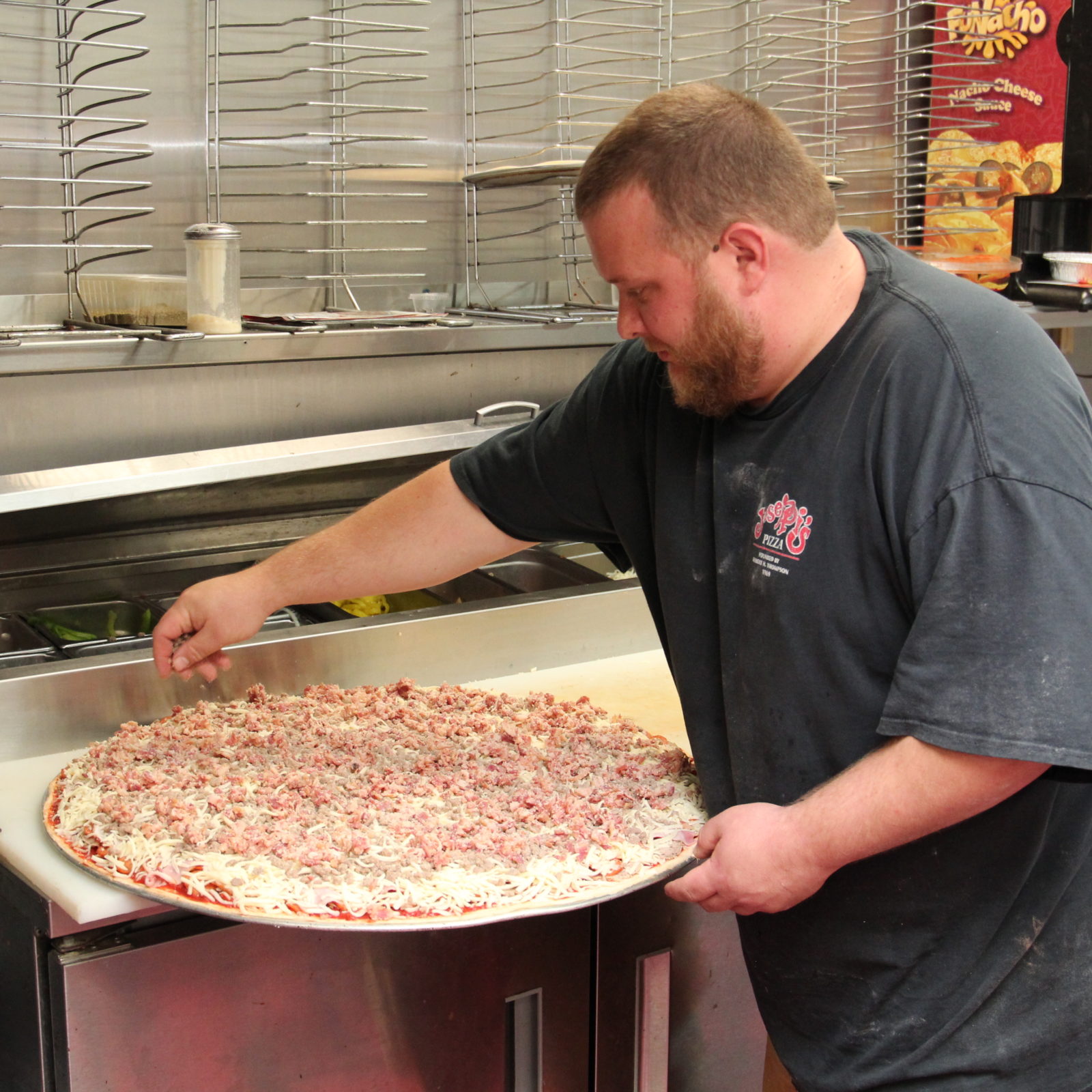 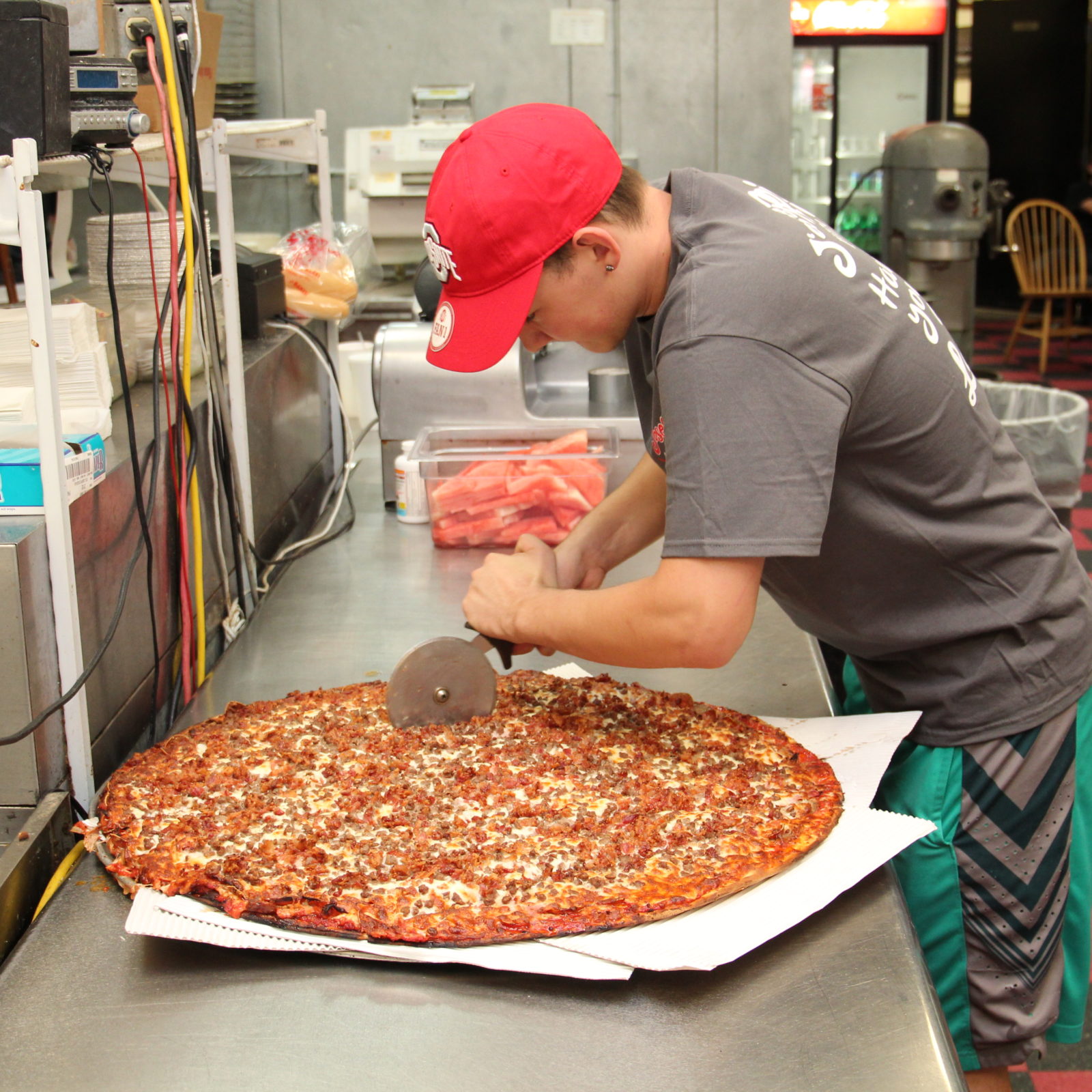 This is when the head games begin. The kitchen staff tells you cautionary tales about those who have failed—and the “Loser’s Bucket.” They start prepping the table with bowls of ranch dressing and barbeque sauce, explaining that the taste turns on you and most have to change it up to keep going. They warn you about drinking too much, or too little. Passing patrons and dutiful denizens weigh in on the long odds of finishing, or even getting close.

When the pie hits the table, it almost eclipses it entirely. If not for the lingering heat, they could just put legs on the pan and scoot chairs under it. It looks like a cinematic sight gag, from the movie Top Secret.

We’d prepared the way professional competitive eaters do, with a stomach stretching meal the evening prior and lots of water to preserve the new found space until go time. A few quick pics for posterity and the clock started. We went hard charging for the edges and mentally broke up the 60 slices into short-term goals.

Chew too little and you waste space. Chew too much and you waste time. At 20 minutes, we’d already blown past Cameron Fontana and his camera guy’s mark. It was looking good.

Then the meat sweats set in and we hit “the wall.”

The wall is different things for different people. For us, it was the salt of the bacon and ham that did us in. When you can’t quench your thirst and have plenty of room left to drink, but can’t stand the thought of another bite, that’s the wall. 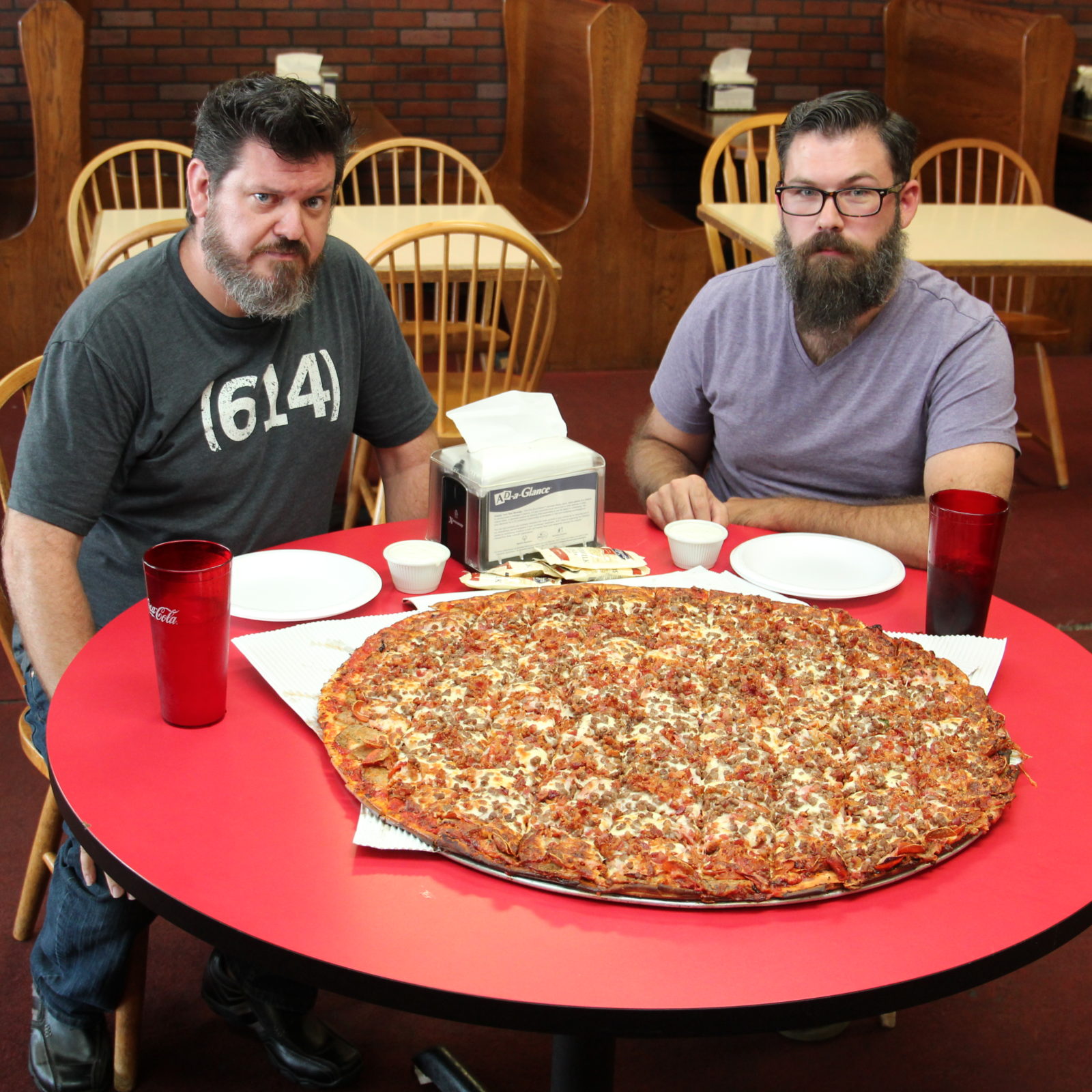 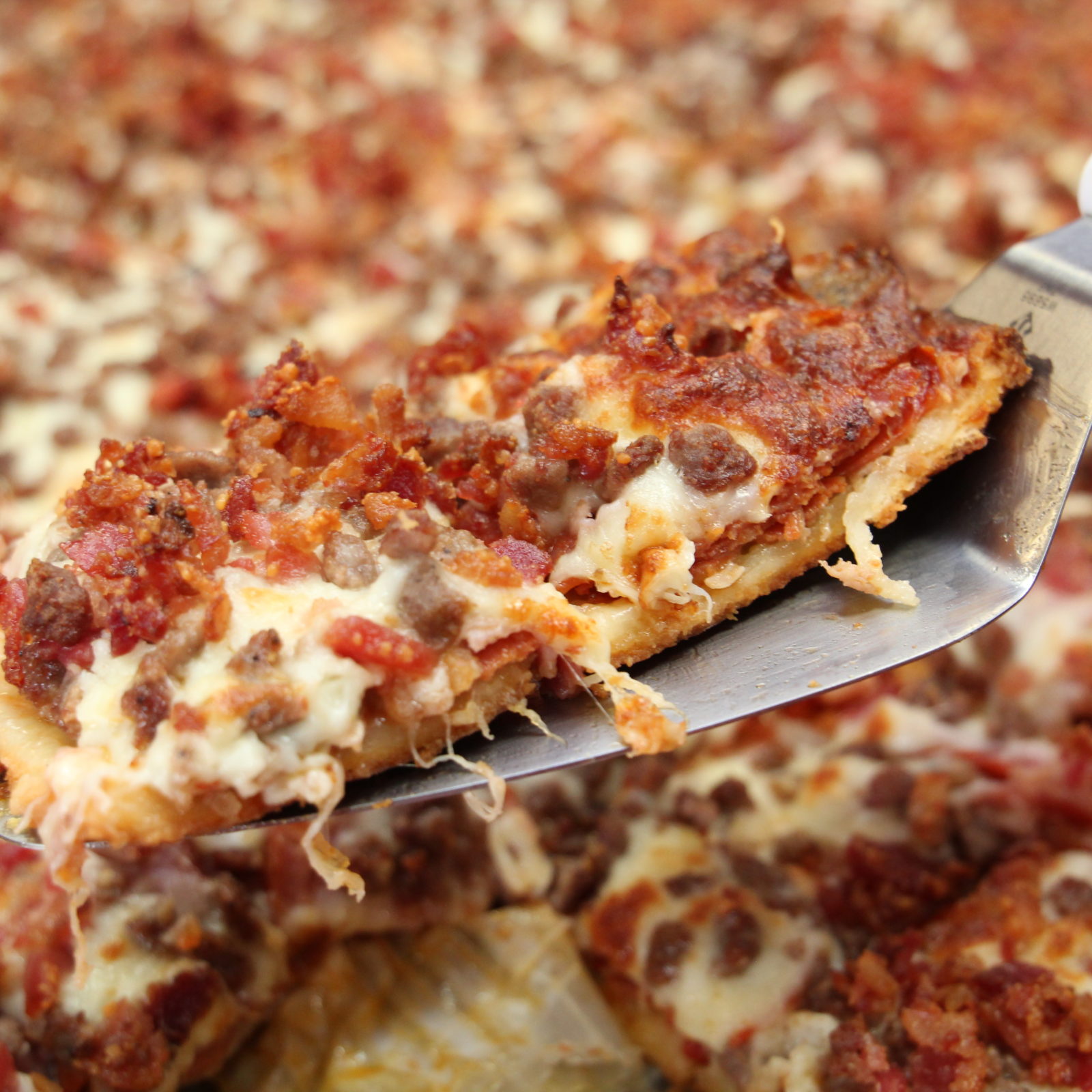 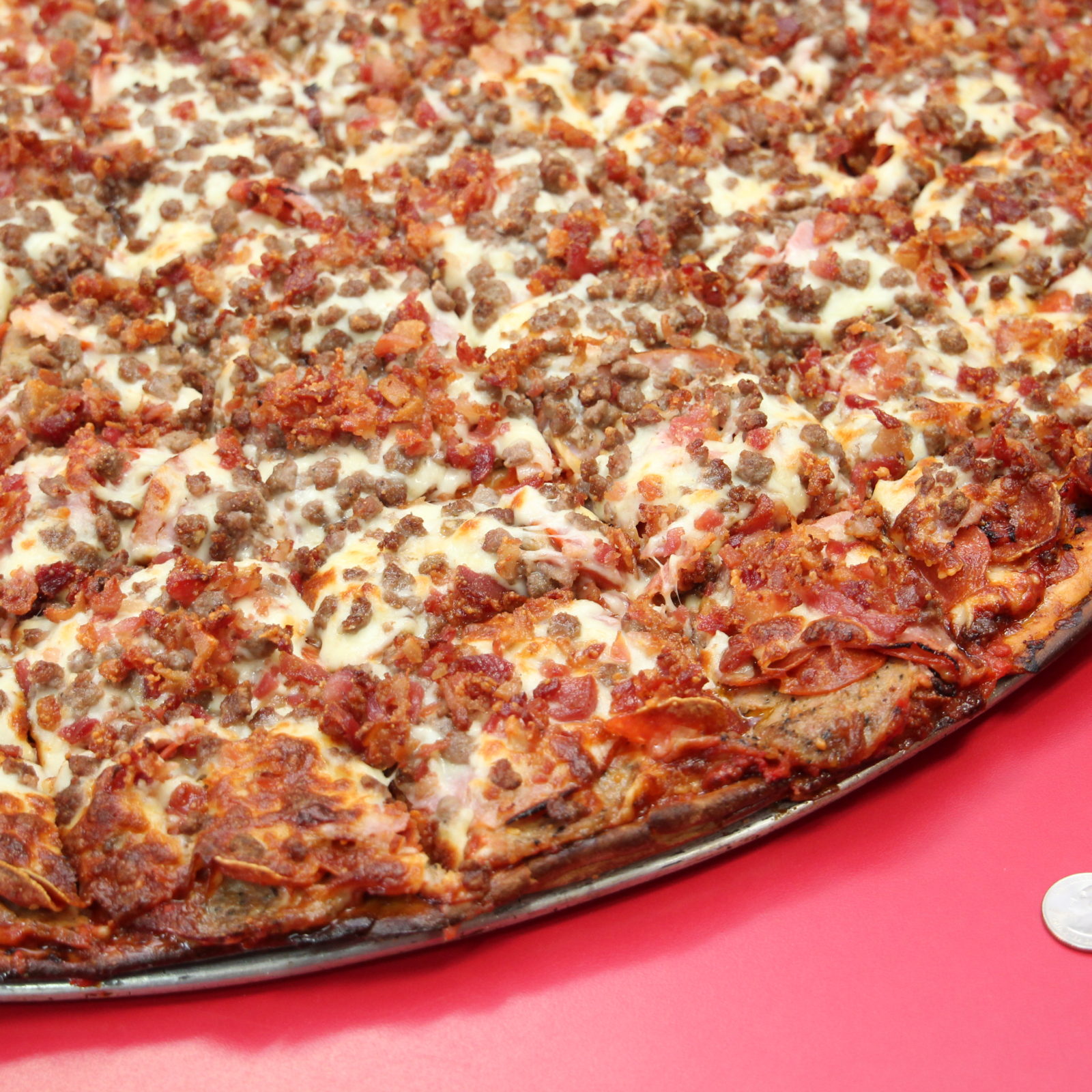 We’d each eaten about a large pizza, no small feat considering by the time we got from the edge to the center, it was more than an inch thick. Pinkert’s athletic training came into play, but we still couldn’t overcome the physics.

“It did help from a psychological aspect, the fact that you learn to push your body and ‘turn off’ or ignore the signals it tells you, to push yourself that much further,” he said.

After a few final slices, we took a break hoping for a late rally that never came. We barely knew each other before that evening, but after spending an hour gorging and gossiping, we’d joined the cult—even if we still didn’t know the secret handshake.

We parted ways, went home, and both slipped into a long carb coma, like a python that swallows a gazelle and has to chill for a few days before it finds the will to move again.

By the way, the pizza was delicious and is highly recommended. Otherwise, we never would have gotten as far as we did. Unlike almost all other food challenges, you get to keep the leftovers. I didn’t have to buy pizza for two weeks. And it was also an irresistible chance to try out that time-lapse app on my phone, shrinking an hour down to three minutes—scored to the theme song from Benny Hill, of course.

But bawdy British sketch comedy is another kind of cult altogether.