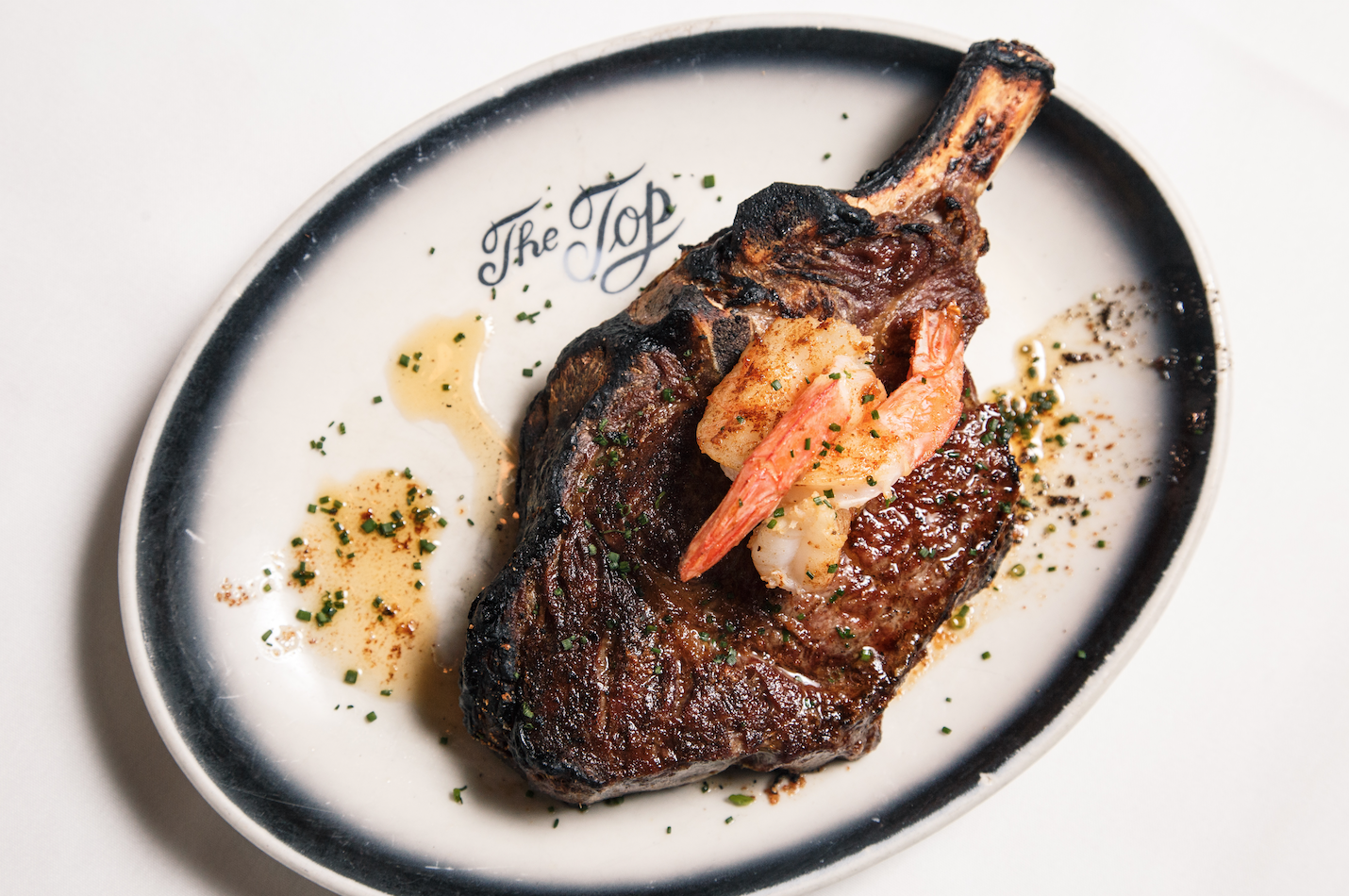 When I was sent on assignment to Columbus landmark steakhouse The Top, I had no idea that my editor was figuratively handing me a ticket to a time machine.

Naively, I thought I’d stop by for a bite and dash o a quick write-up. Bada bing, bada boom. Instead, what I found, in addition to the mind-blowing top shelf fare, was an altogether encompassing experience, making me homesick for a place where I’ve never been, and nostalgic for a time when I never was.

More like this: The very last York Steak House is on Broad St. and it’s perfectly nostalgic

It’s not a cliche to call The Top a throwback; it’s impossible to call it anything else. From its geometrically shaped mirrors hung on warm wood-paneled walls to its retro-font menus, to when you walk in the front door and catch a quick glimpse inside a private room where’d you expect to see a Ray Liotta character closing a deal—every facet is sealed in our collective nostalgia.

The Top is vintage vintage—authentic down to the carpet, rather than the “fauxback” trends we see so often in post-Mad Men pop culture.

It was, and still is, a true supper club, a relic in the restaurant industry that’s barely changed since it began operations in 1955. Lucky for us. Because the only thing harder on the budget than steak—is time travel.

Seated in a booth, absorbing the Rat Pack vibe, I perused the extensive wine list. The price points make this place a special occasion destination for most. The service was impeccable and friendly. The dim lighting created an ambience even before the dinner rush.

I started with an Old Fashioned, as you do when in a supper club. The stiff mix begged a slow imbibe. I ordered Oysters Rockefeller from my server and silently wished I had done my hair and worn pearls. I smelled the oysters before I saw them. Had I not already been seated, I may have been carried away on the aroma, Pepe Le Pew-style. The cheese bubbled and steamed as the plate hit the table. Lava-hot and savory, the toasted cheese enveloped the delicate mollusks on the half shell.

I had to stop at two to save room for the main event. The specialty here is no secret: steak. I ordered something that had been foreign to me previously: a 40-day aged, 24-ounce ribeye. Sourced from Michael’s meats, whom the owners, Regina and Denver Adkins, have partnered with for decades. Michael’s ages some of their meat selections, altering the liquid balance in the tissue. This affects everything from spice and salt absorption, to cooking time and, above all, flavor.

The entree’s arrival felt like a right of passage. The char-broiled cut was topped with huge grilled shrimp, like buttery pink ornaments on a tree. Branches of fresh broccoli hugged the side of the steak. Beautiful to look at, sure…but good lord…the flavor. The crisp char crunched lightly, and the tender red inside melted in my mouth—the kind of bite that urges you to close your eyes and exhale as you chew. Along with my huge steak and veggies, I got a crock of shareable-size au gratin potatoes. (Don’t you judge me.) When I cut into them with the side of my fork, and the smell of cheesy, creamy potatoes drifted up from the dish, I made a silent apology to my dear departed mother for already having cursed her her au gratin from memory.

More Like This: Neighborhood Nostalgia: Ringside Cafe, one of Columbus’ oldest bars

Would I like some dessert? the server asked. My waistline said hell no, but luckily it wasn’t conducting this Dionysian train. What arrived was a pair of golden, house- made, phyllo dough triangles full of creamy mascarpone, laid on a bed of saucy berries, and drizzled with caramel. Baked to order, and worth every moment of wait. (You’ll need that time to digest anyway, you nihilist.)

Perhaps it’s because every bite forced me to stop and borderline genuflect—but time truly seems to stand still at The Top.

Between bites, I peered around the dining room in quiet amazement. The nooks and booths lend each seat in the house a certain intimacy. I meditated on the lover’s quarrels, marriage proposals and anniversaries these walls had witnessed over the decades and wondered if, like a Jack Torrence vision, it would cease to exist once I left.

Maybe it was the stiff drinks, or maybe it was because the pianist started playing my parents’ song, but as the music fell around me like soft snow and I mouthed the lyrics I had heard a thousand times, I began to understand the draw to the this bygone environment in a way I hadn’t previously.

The big takeaway (besides a Herculean pile of leftovers):

The Top remains relevant with nary an update because it’s a place holder—keeping open a door to a bygone era that people can step through when a meal deserves to be dining, darling.

The Top has been voted Best Steakhouse and Best Neighborhood Restaurant (Bexley) in the (614) Magazine ColumBest readers’ poll. It is located at 2891 E Main St.