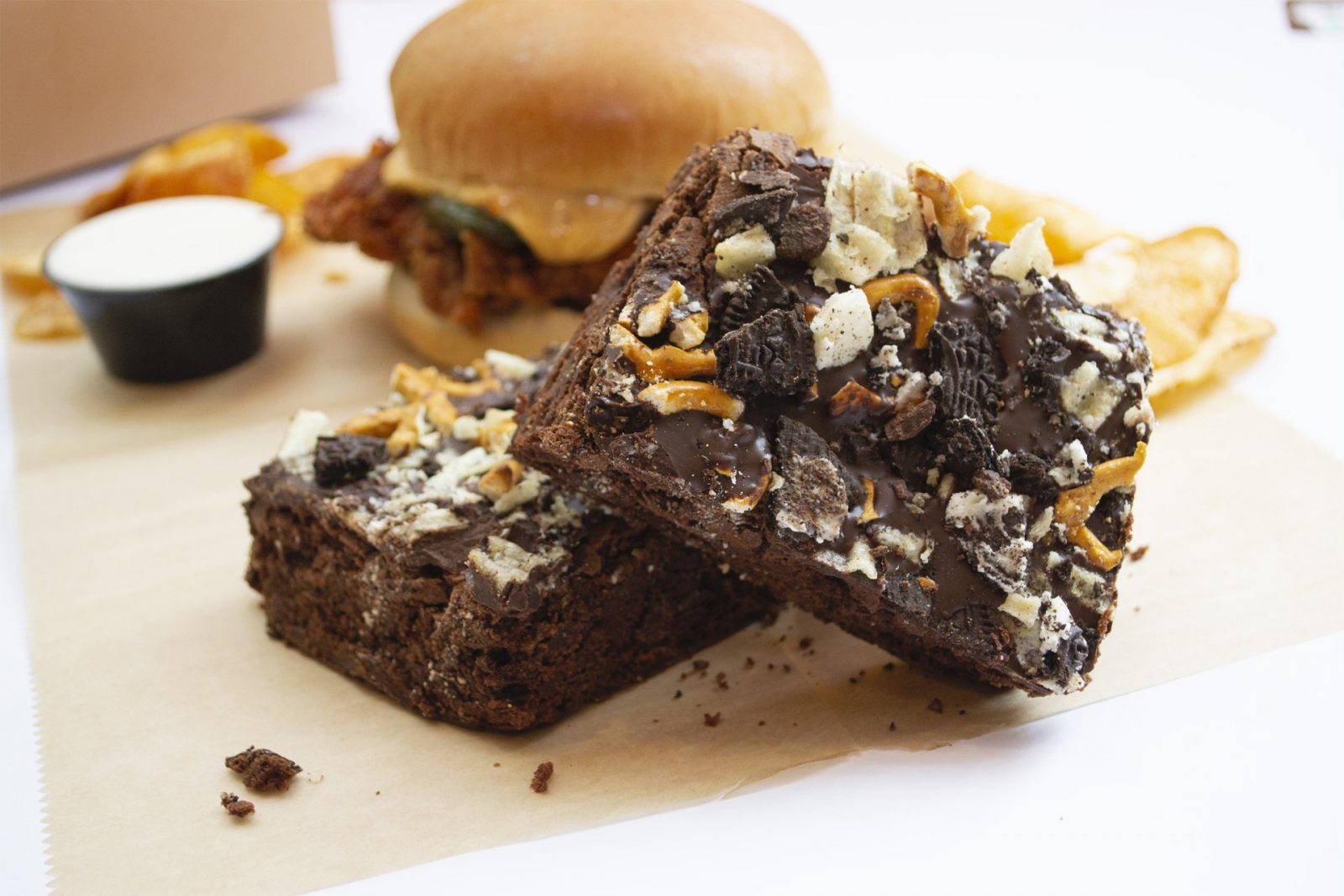 Most brownies taste pretty good, but don’t do much to address larger world issues.

Then again, most brownies aren’t like the new dessert collaboration between Fried Chicka Bang and local bakery Fourteen Twenty Nine.

This new sweet treat—available for a limited time at both Fried Chicka Bang’s Polaris and Arena District locations—starts with a rich, fudgy brownie before adding pretzels, potato chips, oreo crumbles, and a chocolate glaze for a medley of sweet and salty flavors.

But even more importantly, proceeds from the Bottom of the Bag Brownie benefit victims of human trafficking.

Because while the popular new fried chicken sandwich-serving popup is dedicated to providing people with a great meal, they also recognize that there are always more important things to consider.

“We don’t take the fact that we can make a difference through food sales lighty,” said Fried Chicka Bang co-owner Maria Swallie. “Fourteen Twenty Nine is another woman-owned business, and we want to bring light to their cause, because human trafficking is such a serious issue today.”

Billed as a “dessert-based social enterprise,” Fourteen Twenty Nine is a Gahanna-based bakery that donates a portion of a every purchase to local nonprofits geared toward assisting victims of human trafficking. Since 2017, they’ve been serving up cookies, brownies, rice krispie treats, and other rich, delicious baked goods for a truly important cause.

And for Swallie and company, collaborations are a cornerstone of what they want Fried Chicka Bang to become. Not only do they give a boost to other deserving local businesses, but they usually result in an exciting new product.

While the eatery has previously partnered with places like Fartley Farms to feature their Sweet Habanero hot sauce on a new sandwich, and Meatball Mafia plus Ezzo Sausage for the April O’Neil (a sandwich featuring fried chicken, marinara sauce, mozzarella, and spicy pepperoni), this new venture is the first dessert-based collab they’ve taken up. But according to Swallie, they’re open to all types of work with local partners.

“If we can tie it into a sandwich, great, but we’re not opposed to doing brownies or desserts, and in the future there might even be retail or clothing collaborations,” she said.

So if you’d like to help out some great Columbus nonprofits and grab a truly decadent treat, make sure to snag a Bottom of the Bag Brownie with your next order. They’re $5 a piece, and can be purchased as an add-on to a meal or individually. Plus, Swallie says, they’re huge.

“Honestly, they’re almost as big as the sandwich,” she said.

Bottom of the Bag brownies can also be purchased as part of a custom order or by the piece through Fourteen Twenty Nine.