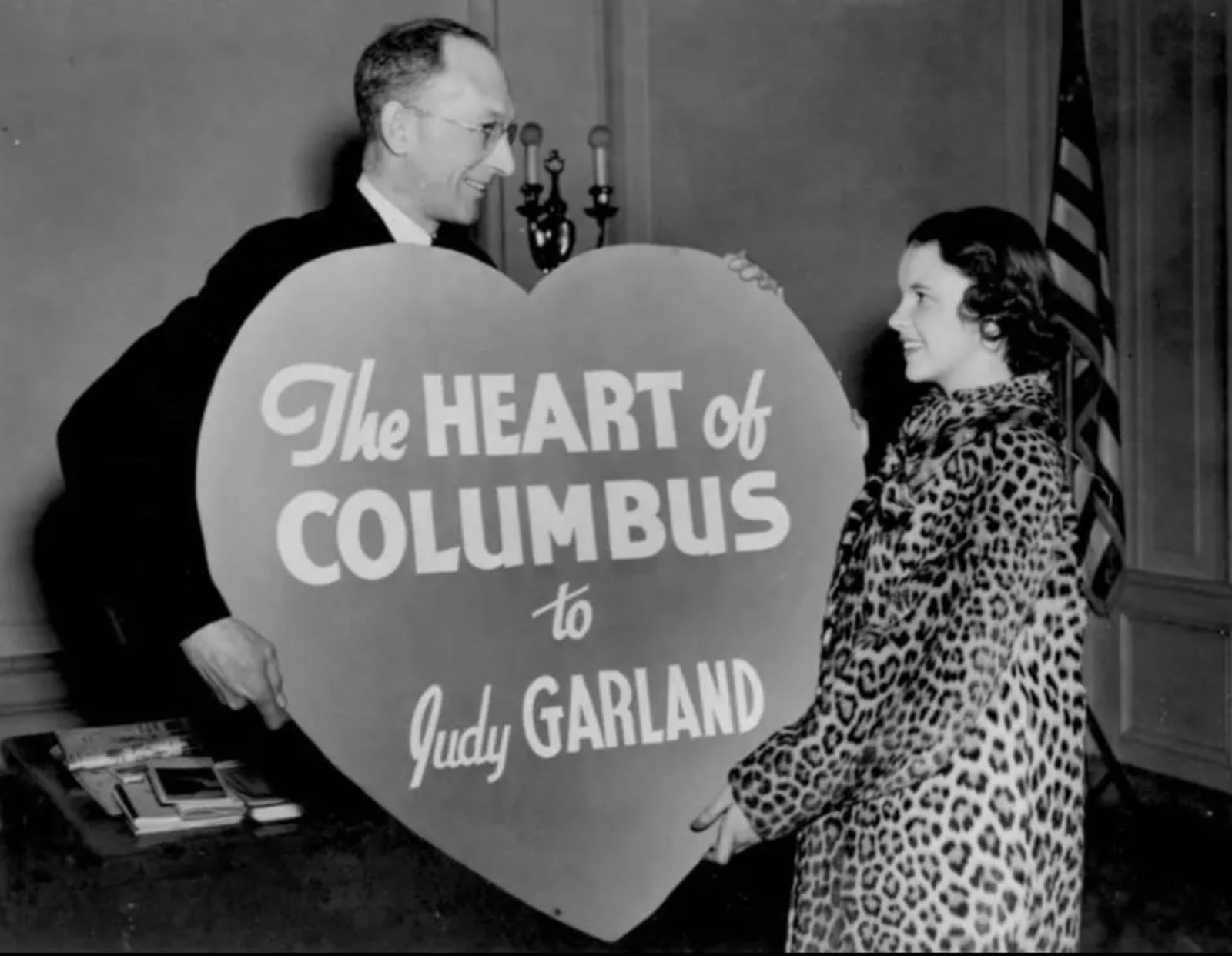 The man behind Grandpa’s Cheese Barn has died

This story originally appeared in the December 2022 issue of (614) Magazine, and was written by local historian John M. Clark as part of a recurring series on unique Columbus history.

In March 1938, 15-year-old Judy Garland arrived in Columbus as part of the starlet’s promotional tour for her new movie, “Everybody Sing.”  For two straight days, she introduced multiple showings of the film at the Ohio Theatre, singing a few songs and sharing laughs with adoring audiences.  As a testament to her popularity, the teenaged singer and actress was already earning $1,500 a week (about $32,000 in today’s money).  And this was a full year before the release of “The Wizard of Oz,” which catapulted Garland into super-stardom.

Upon Garland’s arrival in Columbus, Mayor Myron Gessaman presented her with a giant, cutout heart proclaiming her as the “Heart of Columbus.”  She, her mother and Roger Edens, an award-winning songwriter and Garland’s mentor, then settled into rooms at the Neil House on South High Street, across from the Ohio Statehouse.

In the short time she was here, Garland enjoyed ice cream and sodas from a shop at North High and Second Avenue, the approximate present-day location of Northstar Café.  And at her request, a ping pong table was set up behind the Ohio Theatre’s screen, where she would pass the time between stage appearances by playing against theater staff members.

It was during one of her brief live appearances between screenings that Garland was interrupted by two young men who took to the stage approached her.  They introduced themselves as members of Sigma Chi fraternity at Ohio State University, then presented the surprised teenager with a fraternity pin and an invitation to dinner at the Sigma Chi house.  Garland promptly accepted.

Upon being “pinned,” Garland was declared the “Sweetheart of Sigma Chi” and an official member of the fraternity’s Alpha Gamma chapter.  And though a Life Magazine photographer was always in tow, the popular monthly’s editorial staff insisted the idea for the dinner began with fraternity members and not as a publicity stunt.  (Photos of the event ran in the magazine’s March 28th issue under the title, “Life Goes to a Party.”)

That evening, Garland was whisked to the Sigma Chi house, where she was escorted to the front entrance by Wesley Leas, OSU senior class president and drum major of the Ohio State marching band.  In addition to dinner, Garland was treated to one fraternity brother’s impersonation of an ape; she was encouraged to try out the chapter’s wooden paddle on a couple of members, including James McDonald, co-captain of OSU’s football team; and she was toasted with glasses of milk by the wholesome-appearing young men.

Garland’s 1938 visit to Columbus was not well-documented (aside from the Sigma Chi connection), though she apparently was filmed during two of her on-stage appearances at the Ohio.  A 15-year-old high school student from Bexley named Russell Leach carried his 16-millimeter film camera into the theater on two occasions, following her every move on stage with his motion picture lens.  He called his amateur movie, “A Night in Columbus” and sent it to Garland, who reportedly screened it at her home.  Unfortunately, Leach was not permitted to enter the theater with his sound equipment – for which he sent Garland his regrets.

Almost 30 years later, Garland returned to Columbus, to perform in concert at Vets Memorial Auditorium, on West Broad Street.  The date was October 7th, 1967.  Now, at 45, she was the mother of three children, with four ex-husbands and more than 20 attempts at taking her own life.  She told reporters here that she hadn’t slept well on the train, and reviewers gave her only “so-so” reviews.

But despite her health problems, both physical and mental, fans still couldn’t get enough of the woman who once sang about finding true happiness “over the rainbow.”  And that is especially evident from the cheering captured by an amateur, audience-member recording of her concert.   Audiences loved to love Judy Garland.  And they did so, right up until the very end.  Two years after her Vets Memorial performance, and having married for a fifth time, she died of an accidental drug overdose at her new home in London.