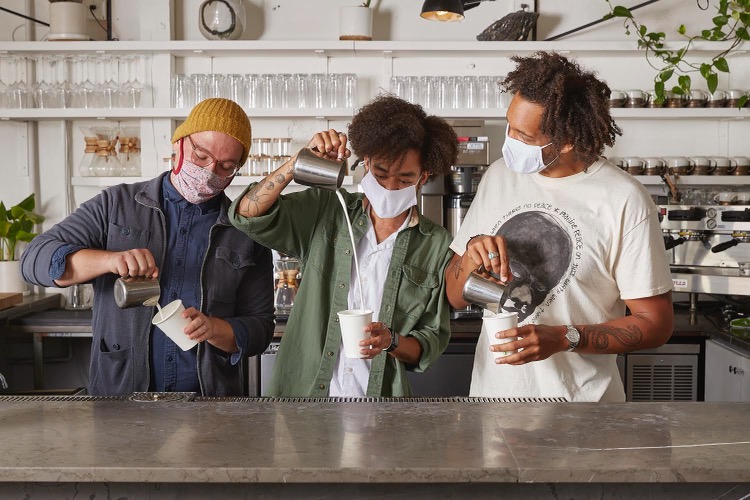 If you walk into the popular restaurant Comune on any weekend morning, you’re likely to catch Parable Coffee slinging some of the hottest coffee drinks in town from what was at one time the restaurant’s bar space: Items like sesame miso caramel or rosemary and pink peppercorn lattes seem borderline irresistible now that the chill of winter has set in.

Comune, located at 677 Parsons Ave., has ceased bar and dine-in services due to COVID-19, a move that opened the door for Parable Coffee to rent out this area Friday through Sunday weekly. The move is beneficial to both parties: It provides Comune with income from the rented space while affording them more foot traffic, and it offers Parable owners Ben Willis, Wyatt Burk, and Jeffrey Clark the ability to launch the coffee concept they’re truly passionate about.

“I think oftentimes, you know, in an ideal world, you’d be able to afford a massive space to rent, but we don’t live in that world anymore,” said Willis. “So how can we operate in a space that’s big enough to house what we need to house and not pay for things we don’t use? The best way is a shared space. They provide us with a place to make coffee without having to subsume a huge lease for a space we can’t really use.”

The very idea of the pop-up restaurant, which has been increasingly popular in recent years, is based on this premise as well: Give a smaller business, typically one that’s just starting out, rental hours in a space when it’s not being used by the primary tenant.

“For being a brand new concept, having a place we don’t have to fully commit to was perfect,” she said. “Not having to purchase all the equipment, it brings your expenses way down and allows you to focus on your goals.”

Another popular option, housing businesses like Lion Cub’s Cookies, are kitchen incubators such as Food Fort, which allows new restaurants to rent shared kitchen space for a fraction of the cost of a full-time lease. Additionally, cloud or “ghost” kitchens give eateries a space to prepare food and offer delivery from without the hassle of maintaining a storefront, and have given new life to beloved Columbus restaurants such as The Florentine.

It isn’t just smaller businesses seeing the benefits of co-operative spaces either. Craft brewing giant BrewDog and Columbus sandwich icons Brown Bag Deli have teamed up in a shared Short North spot that gives Brown Bag its own counter space while allowing it to serve hungry BrewDog patrons.

And while the financial benefits of space-sharing are clear, there’s more than just monetary incentive to create co-operative restaurants. They have an undeniably fun, fresh atmosphere, and a definitive vivacity that people are drawn toward.

“The thing that makes so many coffee shops successful is the sense of community, the sense you can go somewhere and be seen and heard,” said Willis. “And with a shared space, that’s even more apparent. You get a whole bunch of different people that otherwise wouldn’t cross paths. This creates all these new and interesting connections; that’s important, and we think people like that.”